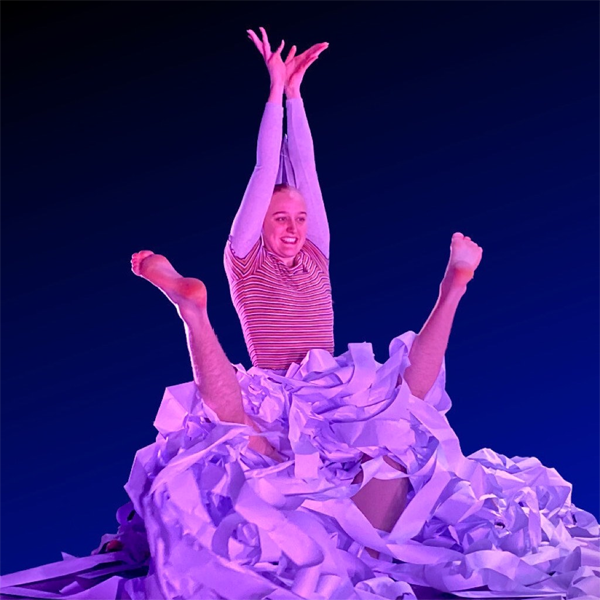 Guiding children onto a stage brings a mix of emotions; some bounce up the stairs quickly, eager to be part of the action, others are more diffident, concerned that they may have to participate more than they feel comfortable with. And by placing the audience upon the Goodwood Theatre and Studios stage in this way, the central thrust of Especially On Birthdays is immediately referenced, with the young audience reflecting the central theme of the different reactions children can have to the same situation.

Especially On Birthdays is the story of twins; Tanika (Katrina Lazaroff) is loud, happy and outgoing, while her brother Tim (Stephen Noonan) who is two minutes younger, is quieter, reflective and not so keen to be the centre of attention. They are about to celebrate their sixth birthday, and for the first time, they will be separated, going into different classes at school. How they deal with this within their relationship is the basis for this minimalist language production; the twins’ dilemma is shared and reflected, with some audience members invited to join in and share the experience.

That this production is almost entirely without words is of itself quite intuitive. This is the way that many children operate; what is not said, but intimated, forms a large part of their communication. For the children in this audience, it allowed them to fill in the spaces with their own experience, their own desires, their own dreams. And they were not backwards in coming forwards with their thoughts; even the shy ones managed to make their feelings known, albeit in subtle nuance. The recorded narrative was almost for the adults’ sake, just so that we could understand what was actually going on!

Directed by Dave Brown (who spent 20+ years as Artistic Director of the iconic Patch Theatre) and Roz Hervey (Force Majeure, Patch, Restless Dance Company et al), Especially On Birthdays is a work by the international partnership Paper Boats, a “platform for theatre-makers creating performances for early childhood audiences”, conceived by Brown post retirement from Patch. Brown explained, before the show, that Paper Boats seeks to create works utilising the skills and shared vision of an international community without having to carry the financial weight of formal infrastructures, utilising instead existing infrastructures of partner companies. The show has already been produced internationally; such collaborations, tapping into common experience, can only auger well for children’s theatre.

Especially On Birthdays is a result of this shared vision, developed by artistic communities from Australia, USA, Singapore and New Zealand. With an evocative music score for the Australian production from ZephyrROM (no introduction needed for the Zephyr Quartet!), this production taps into childhood fears, joys, expectations and disappointments, and ultimately confirms the bonds of shared sibling childhood. For the audience to be able to share in the experience (rolling around in mountains of paper chain was a bonus) is an acknowledgement that the growing up is hard, and sharing makes it that little bit easier. And big sisters can be a pain!

The show is featured as part of ‘Come Back’, a selection of productions playing at the Goodwood venue (now under the stewardship of industry stalwarts Chris Iley and Simone Avrimidis). This limited season deserves a return; more young audiences should be exposed to quality theatre such as this. Brava to The Paperboats from my little ones.

When: Closed
Where: Goodwood Theatre and Studios