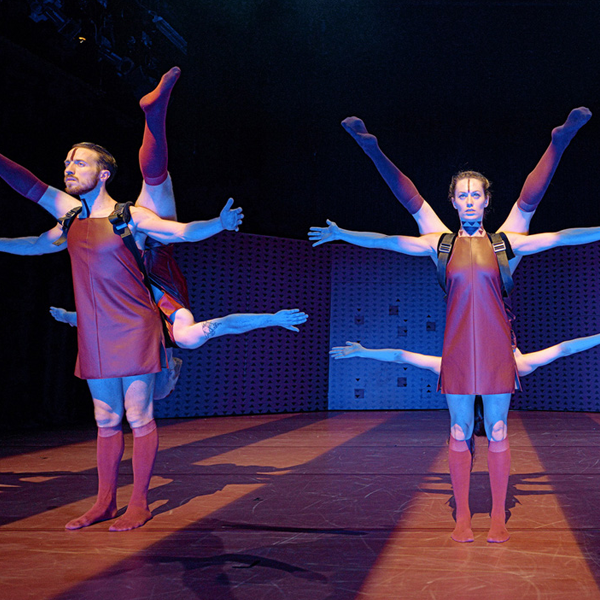 Adelaide’s Australian Dance Theatre’s Artistic Director Garry Stewart is an international champion of dance. The Centenary Medalist began choreographing his own new works in 1990 and famously had six dancers abseiling down the sails of the Sydney Opera House for the billion viewers of the International Millennium Broadcast. He has led ADT since 1999 while also creating new dance abroad, and Objekt is one of them. This work was commissioned in Germany (as you might guess from the German title) in 2016 and is remounted currently by ADT’s Associate Artistic Director Sarah-Jayne Howard.

Objekt is a work with a dark outlook and if Stewart has this warning to his audience in 2016 in the wake of cruel American renditions post-9/11, it’s certainly even more appropriate today in our COVID-stressed social cesspool, and incidentally, the 20th anniversary of the former. Perhaps playfully incorporating an Australian element at the beginning, the dancers are dressed in anonymity via head-to-toe outfits bearing a pattern resembling the broad arrows borne by NSW convicts. These characters perform meaningless mechanical activity seemingly without end. In this scene and ongoing, while the compelling costumes imply androgenous forms, most of the action is masculine and some of that is troublesomely violent – all sense of feminine balance is absent. Objectification increases and empathy decreases. Street fights, beatings, and people carried about like chattel are wonderfully inventive and evocative. I can’t see how a German audience would not mistake a scene - where Stewart has dancers proudly waving banners hosting a bland symbol while several others completely dominate another few by kicking, punching and dragging them on the ground - for SS guards beating Jews and Communists in the ghetto.

Having said that, Objekt is technically masterful. Brendan Woithe’s edgy score and soundscape keeps you anxious and tense and never lets up with its deep bass and moody changes. Chris Petridis’s enveloping lighting utilises plenty of mauve perhaps signaling furtive night. Stewart’s choreography is demanding on Howard’s dancing team in its fluctuating rapidity and teamwork. The focus on precision in performance is palpable. Stewart’s use of symbolism and messaging through the dance medium – the sheer inventiveness of it – is thrilling.

PS - Garry Stewart is set to step down from ADT at the end of this year and it would be foolish not to see his next production - due November - with the provocatively blunt and titillating headline, "Love, Sex, Jealousy & Explosive Dance". Entitled G, the ballet Giselle, will never be the same.