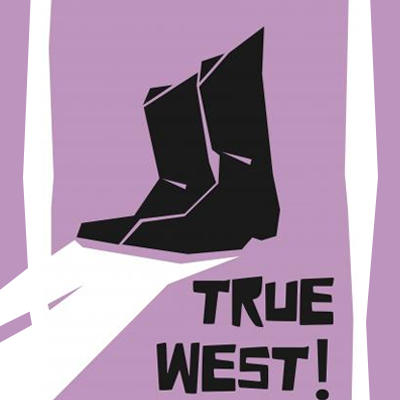 Out of the cold, wet night and into the convivial warmth and excellence of the Bakehouse. And we are to receive yet another wonderful, riveting production as, with our tears, we count down to the demise of this beloved and significant venue.

The intimacy of the auditorium and the commitment of the actors makes this Sam Shepard classic just a bit daunting. There is a sense that the vengeful mania of big brother Lee is only just under control, and he is just metres away. Actor Marko Siklich is a big man and, inhabited by the hair-trigger psychopathology of Lee’s character, he is really rather frightening. Designer Hayley Green has placed the action right at the audience’s knees in a skeletal house frame. Beyond is a view of vast symbolic desert whence Lee is purported to have come to visit his screenwriter brother who is housesitting while their mother is in Alaska. Lee is a hustler and petty thief who brings with him a complex sibling agenda and, between downing beers and crushing the cans, he usurps brother Austin’s relationship with his Hollywood agent and a battle of territorial imperative ensues, climaxing in one of the greatest bizarre theatre scenes ever to involve toasters. Amid the sturm und drang of the terrible sibling showdown there is humour and also a knife-edge sense of veracity. Family life can be a dangerous place.

Director Caroline Mignone seems to have taken the play right under its own skin. It is a remarkably tense and vivid production with superb performances, including her own as the poor, hapless mother.

Stephen Dean maintains his track record as a leading lighting designer in this work which, indeed, has been a work of talented devotion from all. The play is officially presented by the two principal actors and, as such, is an impressively professional enterprise with the power of a Flinders Drama alumni background. And, not to be reiterative but, dammit, it serves to emphasise what Adelaide’s theatre community will be losing without the Bakehouse.