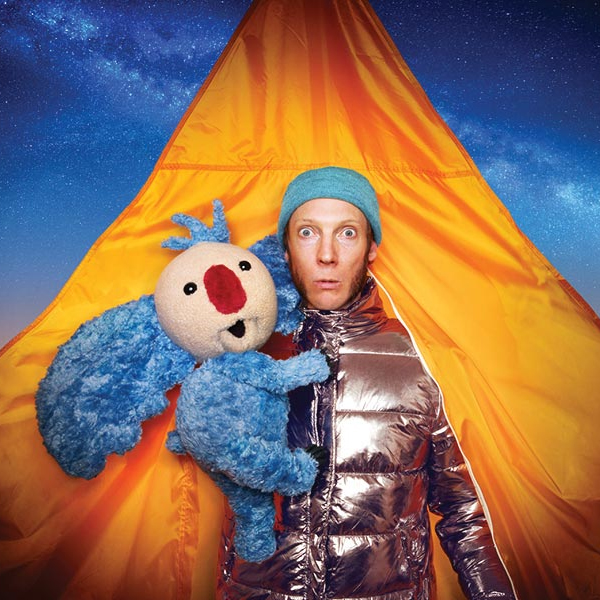 Not a word has been spoken and the children have already started giggling. Standing in front of them, Eddie (Nathan O’Keefe) peers into the gloom. He’s wearing fluoro running shorts, a silver reflective vest, leggings and sandals. A white teddy in matching vest, who turns out be Lucky, is strapped to his backpack. Yes, he looks ridiculous, and the kids love it.

Eddie is clearly a city guy, and he’s very unhappy about the fact that the city is big and noisy, and he desperately needs some sleep, so he’s come bush to get a good night’s sleep. Will he get it?

Hiccup! was written and directed by Jude Henshall and Ellen Steele, and they have succeeded brilliantly in producing a contemporary Australian puppet show for children. Tamara Rewse’s muppet-like characters are immediately endearing, and the audience is captivated from the get go, initially by Eddie, and then by Quokka, Koala and Emu.

Quokka (animated by Chiara Gabrielli) wants to go the city. He loves shiny, shiny things and there is lots of them in the city. He wants Emu (Nathan O’Keefe) to go with him, but Emu is an inventor, and he’s right in the middle of something right now…

Which turns out to be quite useful, as the peaceful bush idyll is suddenly punctuated by Hiccup! as Koala (Lachlan Micklethwait) frightens the trio on his 273rd (give or take) day of extremely loud hiccups. There follows a series of attempts to rid Koala of his hiccups so they can all get on with, respectively, collecting shiny things, building inventions and getting some sleep.

Jonathan Oxlade has designed a stunning set, all ochres, pale greens and greys; trees and shrubs with fan blades, rocks with candy stripes and far off hills. Eddies ochre tent is tucked into the rocks and the clever use of internal lighting allows Eddie (O’Keefe) to seamlessly duck in and out of the tent and reappear as Emu.

A bit of a wobble with the follow spot is soon forgotten as the Chris Petridis lighting design brings us the outback stars and the crisp moonlight. And are they fireflies at the end?

The cast has the timing down pat as they bounce off each other, and they’re clearly having fun as they put their puppets through their paces. Perhaps sometimes a little much, as occasionally the focus is pulled from the characters onto the puppeteers, but for the most part it works well.

There’s some nice audience participation with some call and response rock and roll – all in the name of medical intervention, of course! The cast get to show off the fact that they can sing, and sing well, with songs by Ross McHenry.

Windmill has worked hard over the past year with their Windmill At Home program as a response to COVID-19, but it’s just so lovely to be back in the theatre seeing these fabulous children’s works first hand. And the kids thought so too.