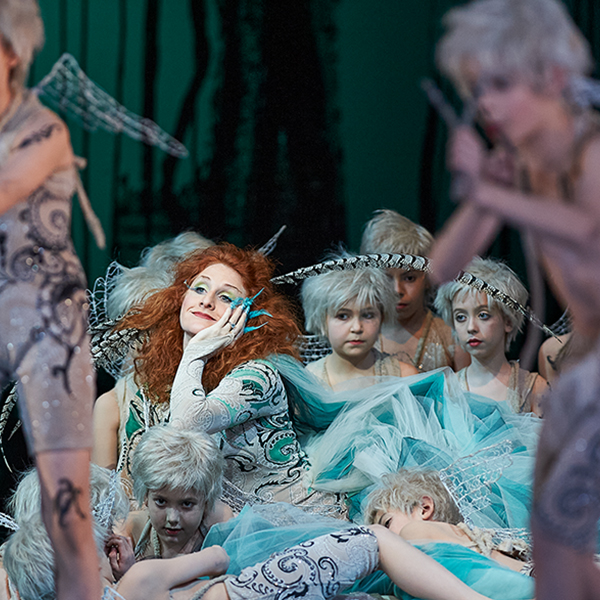 The last thing one would have expected of an Adelaide Festival operatic centrepiece is that, amidst a wealth of top human talent and technical wizardry, a dog would steal the show.

But so it is in A Midsummer Night’s Dream. It is director Neil Armfield’s mighty production and it is director Neil Armfield’s marvellous and mellow dog, Lock by name, and belonging, in the Shakespearean scheme of things, to the band of merry mechanicals who deliver that delicious rustic kitsch performance of Pyramus and Thisbe for the entertainment of the royal couple, Theseus and Hippolyta.

Clearly aware of Lock’s star power, Armfield has even given him his own found-in-the-woods special vignette which gives the audience a chance to cheer his stage obedience.

It has been uncommon for a live dog to play the part of dog in the Dream and one may dare to call it type casting in this time of blind casting wherein anyone can play almost anything other than what perhaps was intended in a script. For instance, in this grand production, Puck, the English woodland sprite, non-singing in the Britten variation on the Dream theme, is played by Mark Coles Smith as a rather masculine Aboriginal warrior spirit with a strong strine accent.

Indeed, director Armfield has taken all sorts of lateral inspirations to add whimsy to the Benjamin Britten Dream. The lovers Lysander and Hermia arrive onstage looking impeccably Brad and Janet 1950s as if they had just dropped in from The Rocky Horror Show.

Amid the clouds of faeries in their blonde wigs, all a lithe children’s soprano chorus from Young Adelaide Voices, the one child wearing glasses immediately reminds one of the Lost Boys of Peter Pan.

So, there’s lots of lively pastiche alternativism to spot in this latter-day take on a beloved Shakespearean classic. And, as the surtitles flow along, there is the reminder that the work also is about words and some of the sheer prettiness of Shakepeare’s Dream language hangs in the air.

Also hanging in the air is Oberon. The fairy king holds sway, most literally, over his enchanted woodland realm in a flying box. It rises and lowers as he interacts with Puck and with his beloved queen, Tytania, with whom he is squabbling about the Changeling child. This little Indian prince here is cast as African, an adorable wide-eyed wee tot, oft enveloped in Tytania's loving arms and the almost endless flow of her glorious trails of chiffon. Oberon is sung by the utterly dazzling American counter tenor, Aryeh Nussbaum Cohen. His voice is a dream in itself, perhaps the Manuka honey of the musical world. Armfield has done well to marry him to Rachelle Durkin’s Tytania. She is a mezzo of splendid stature as well as voice and beauty. They are a couple to capture heart and imagination, these two.

Teddy Tahu Rhodes may have a lesser role as Theseus, but this brilliant baritone has such a potent stage presence that, even from the fun and games and silliness of the Mechanicals’ play, he draws one’s awareness.  They’re terrific Mechanicals: Douglas McNicol, Louis Hurley, Pelham Andrews, Norbert Hohl, and Jeremy Tatchell, with Warwick Fyfe as Bottom, albeit in an oddity of an ass’s head.

Andrew Goodwin and Sally-Anne Russell thrive as the runaway lovers, Lysander and Hermia, Russell delivering one of the productions funniest moments as she turns on the small-but-feisty tantrum. James Clayton and Leanne Kenneally are well-matched as Demetrius and Helena with Fiona Campbell gracious to a tee as the queen, Hippolyta.

And, of course, there en masse in the pit, perfectly balanced in strength and harmony, is our wonderful ASO conducted by Paul Kildea.

But, while the musicians and the singers and the general business of this production have their merit, it is Dale Ferguson who is truly the lynchpin. Ferguson is responsible not only for the romance and beauty of the costumes but also for the all-embracing, all-consuming magical woodland set, a world where massive plastic drops with exquisite vertical forest motifs softly reveal the flitting life of the fairy kingdom, a world where human and fairy activities and moods are drawn by the movements of a huge, green sheet which moves up and down over the stage and, which seems almost to breathe as it softly billows. When it comes to rest, it encloses Tytania in her dreamy bower.  And all is green, so lushly, beautifully green.  Enriched by Damien Cooper’s lighting, the set is a splendour, almost worth the ticket price on its own.