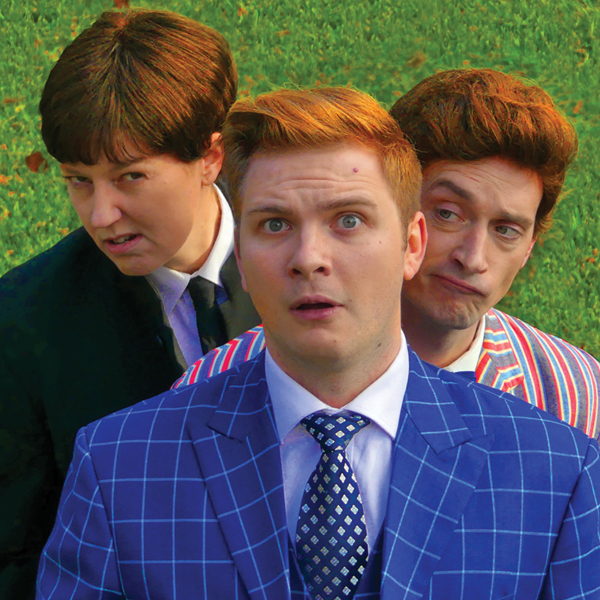 All hail to Robert Bell, the new funny man of Adelaide theatre.

There’s no element of comic performance this young actor does not embrace in his portrayal of Francis Henshall in Richard Bean’s One Man Two Guvnors. He channels the gauche physicality of a Michael Crawford in his prime and adds to it his own whip-swift timing, his boundless energy, and quick-witted improvisational skills.

James Corden won a Tony Award for his National Theatre portrayal of Francis Henshall in the West End. Our Bell is pretty hot on his heels. For which Blue Sky director Dave Simms must take some kudos since he mounts and casts these brave outdoor theatre shows and, year after year, stocks them with first class performers giving strenuous over-the-top characterisations.  When performing in front of an audience spread across an expanse of park-like lawn, staunch and powerful projection also must be part of an actor’s box of tricks.

Simms has the genre down to a tee, even providing Blue Sky knee rugs for audience members after the sun goes down. And the audiences return in droves, these picnic party nights having become ritual social events.

Similarly, with most cast members on return engagements, Blue Sky is as near to an ensemble company as a huge operation can get in these lean days of the arts.

Hence, there are regular names such as Lee Cook who has played not only in Blue Sky shows but also in Simms’ Mixed Salad Productions. Here, with sizzling panache, Cook plays the arrogant upper-crustish Stanley Stubbers, one of the Two Guvnors, while Blue Sky regular Miriam Keane plays Rachel the other Guvnor with androgynous alacrity.

Leighton Vogt is a glory of strutting thespian vanity as Alan, playing suitor to the darling dunce Pauline. Ashley Penny is delicious in the role and, oh, kudos for her wonderful 1960s frock. Another of the hallmarks of Blue Sky are the bespoke tailored costumes. Five stars again.

This play, based on Carlo Goldini’s A Servant of Two Masters, is ridiculously, rib-achingly funny, so long as it has the calibre of performance to deliver the absurdity of it all.

And so it goes that Gary George clearly is having a wonderful twinkle-toed romp as the scary heavyweight Cockney dad, with Steve Marvanek as the hopelessly staid lawyer, and the inimitable Nicole Rutty as the whacky hotel landlady with a past.  Georgia Stockham is great fun as useful love interest Dolly, while Simon Barnett brings the house down over and over again with his nimble nonagenarian shtick. Joshua Coldwell, Angela Short, and four skiffle band musicians round out the wild night on the lovely lawns.

And everyone does their bit betwixt and between the scenes with silly song and vaudevillian show-pony routines. Oh, and they even play the spoons.

Seamlessly organised between Blue Sky and Open Gardens SA, this presentation is just an all-round joy.

One leaves, exhausted not only by watching the fast and furious athleticism of the cast but also from having laughed so loudly and so often for so long.

Where: In the Garden - Crozier Park, Victor Harbor