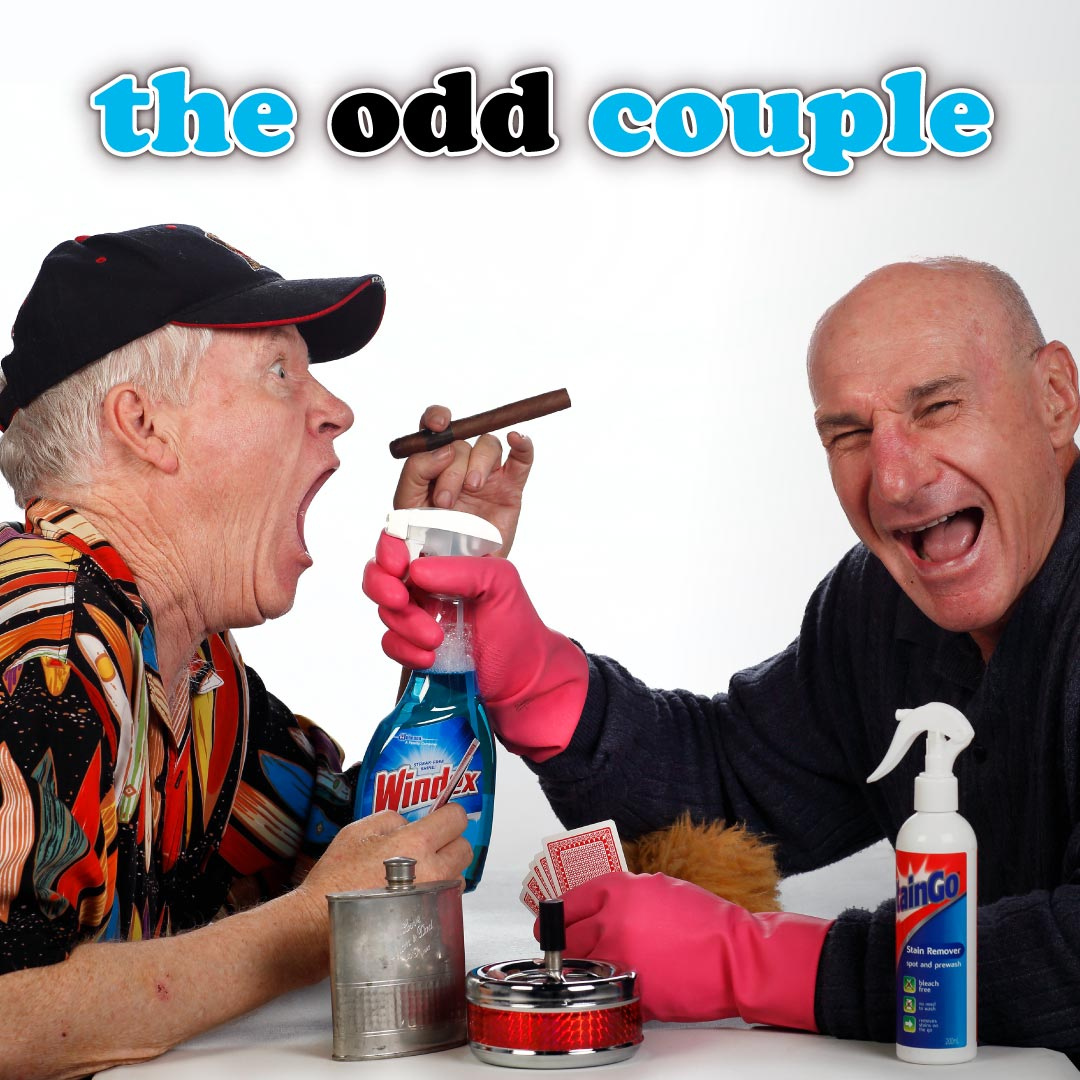 The Odd Couple is an oldie but, what a goodie it turns out to be under the skills of Byrne and David Grybowski in the roles of Oscar and Felix, the world’s most gloriously ill-suited house mates. These are the roles memorably forged by Walter Matthau and Jack Lemmon in the 60s movie and Jack Klugman with Tony Randall on TV. They are hard acts to follow. Then again, the sports writer slob and the domestic-diva news writer have a certain classic comedic substance especially as written by the great Neil Simon. And as Byrne and Grybowski prove, they can be carried off by a couple of capable character actors, even, as in this case, actors decidedly older than the characters they are playing.

In other words, this odd couple carries the show very well indeed and, as always seems the case in MBM shows, they are surrounded by fine support actors.

This is not to say one does not have to be forgiving at times. The American accents are a bit uneven and some of the lines get a bit botched, but the show rolls on in such good spirit that one can’t help just going with it for the laughs.

The New York poker-playing buddies are depicted by seasoned players gleaned from assorted amateur theatre companies around the town. They are very nicely cast with Timothy Cousins giving endearing embodiment to the food-loving cop, Murray, and Russel Ford, colourful as the other hungry player, Vinnie. Gavin Cianci has sleek mobster magic as the cigar smoking Speed and, as ever, Frank Cwiertniak, playing Roy, is a pleasure to see on stage. Their banter and generally anarchically blokey pack behaviour makes a strong contextual backdrop to the unholy domestic partnership of Oscar and Felix.

Of course, it is a period piece. There’s a pesky home telephone on the other side of the room and lots of not terribly PC backchat about wives and divorce. Then again, when it comes to Oscar and Felix, it is a satirical study of myriad universal facets of domestic behaviour and expectations. One suspends disbelief and laughs.

Byrne plays Oscar with strident voice and as many Matthau moments as he can rally. Grybowski grows and grows into the skin of Felix, a complex character, big-hearted and irritating, a man with the thickest of  thin skins, or is it the thinnest of thick skins? Ironically, while the play is redemptive for slobby Oscar, perchance Felix is doomed to OCD peskiness for ever.

Bec Mason and Lauren Weber fill out the cast as the two giggly Pigeon sisters from upstairs. They are English girls, both secretaries, living in New York and looking for fun. Wigs maketh their stereotypes and the actresses play the parts for laughs, and get them.

Co-directing with Byrne. Rose Vallen has tapped into the comic quirks of the characters and added the Vallen choreographic touch to some of the chaos scenes and, one notes, the occasional skip in the step of grouchy Oscar.

The show ticks along very efficiently with a diligent production and tech crew right on the ball, and the set is one of the best this critic has seen on The Studio stage at Holden Street. It is an expansive wall-to-wall design with windows looking over an illuminated NYC skyline. Its scale gives an impressive sense of space to the theatre which, at the same time, allows for a benign sense of intimacy. Win win.

Of course, there is no intimacy in the seating, It is all covid-chequerboard. Audience members sign covid-tracking sheets and have their temps taken upon entry and, in the cashless bar, they queue with impeccable social distancing. It is the new way of the world and, to make up for the lower numbers, the performance season of this most amusing production runs right to the end of the month.

There’s lots of time to gin up and enjoy the tonic.