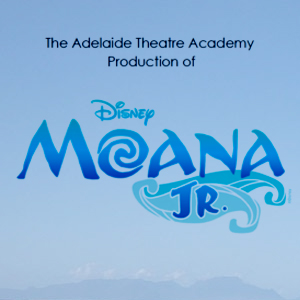 For this generation, there’s been an uplift in the number of strong independent role models for young girls and women. To be fair, most of them are fictional and animated, but at least they’re there! Brave featured Merida who refused to be married off, Mulan followed her warrior heart (albeit having to disguise herself as a man) and the sisters of Frozen were an inspiration to legions of young girls.

The story of Moana is of this ilk, with the young daughter of the chieftain setting off on her own path, and eventually saving her people and their island home.

The students of the Adelaide Theatre Academy (Theatre Bugs) do themselves proud with this stage adaptation. There’s a bit of an issue with sound production which shows up early with a slightly muffled narration but otherwise all goes smoothly for these young actors.

With two productions a day, there are two full casts alternating; by the standard displayed by the ‘Sea Cast’, one assumes the ‘Land Cast’ performances are equally captivating. The triple threats are well evidenced with a number of cast members displaying outstanding singing, dancing and acting skills.

This production allows individual cast members to shine, but not at the expense of the ensemble, with many members taking turns at main character roles before melding back into the polished chorus. Some very well timed comedy provides good laughs for the audience.

The set is simple, with minimal use of props, but the production is so alive and so well paced that the characters themselves are all that is required. As Moana (Maddie Nunn) journeys across the seas in her wooden canoe, well placed lighting by Ben Francis conveys moods and scenes, as does his equally subtle soundscape. Costumes are simple, with coloured T-shirts defining human characters as well as land and sea (characters in their own right) and a fabulous Tamatoa (the crab), complete with Left Claw and Right Claw!

While there are some wonderful individual singing performances, it is the ensemble work that really stands out, with strong vocal harmonies and rollicking dance moves. Most memorable however, is the sheer enjoyment on the faces of the cast, smiling fit to burst!

The nine year old companion, who loves the Disney animation, proclaimed this production “fabulous!”. Quite right.