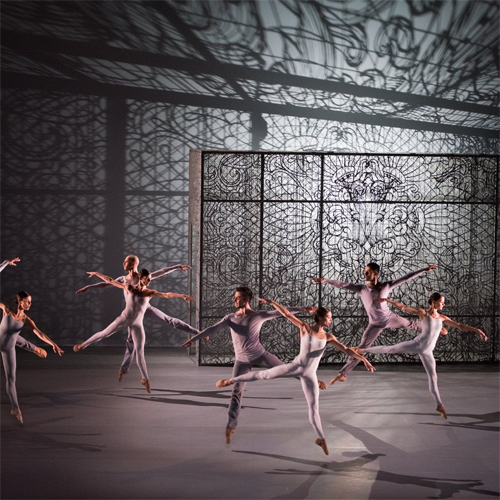 One of the most divisive pieces of music ever composed (at least by a classical composer) is set to dance, three times. The dances are performed by members of the Lyon Opera Ballet and are styled by three different choreographers (Maguey Marin, Anne Teresa da Keersmaeker, and Lucinda Childs) who are all internationally acclaimed.

The music is Beethoven’s Große Fuge (or Grosse Fugue or Great Fugue). It was originally the fourth movement from his String Quartet No.13 in B flat, Op. 130, but he was persuaded to substitute it for something that would be more acceptable to the public, and the Grosse Fugue was subsequently published separately as his Opus 133.

Beethoven composed the Grosse Fugue late in his life, when he was completely deaf. In its day it was variously described as “incomprehensible”, a “babel”, and generally unplayable. It has received similar reviews even in relatively modern times. Beethoven agreed to excise it from his Op.130 through fear of box office failure, at a time when his financial circumstances were dire (which they often were).

However, the Grosse Fugue it has also been given high praise, and Stravinsky stated that it would remain forever contemporary. Even to a modern ear, the Grosse Fugue is a challenging composition. On a first hearing, it often polarises the opinions of the listener: it is either liked, or loathed (at least initially). It is strident, and at times atonal. It has complex and ever jarring rhythms that are forever changing. Individual instrumental parts are not easy to play and it is technically demanding to navigate and interpret as an ensemble.

The Lyon Opera Ballet set each iteration of the dance to a different recording of the Grosse Fuge, and they are all very different. Unlike Keersmaeker and Marin, the recording chosen by Childs is performed by a larger orchestral ensemble rather than by a strict quartet, and is therefore aurally more dense. For this reason, the Childs interpretation, at least for this reviewer, is not as effective as the other two in foregrounding the texture of the music. By contrast, Marin’s interpretation uses only four dancers and, for the most part, each follows the rhythmic and contour lines of one of the four instruments of the quartet. Indeed, it is fascinating to visualise each dancer as an instrument and to contemplate how they interact

Keersmaeker’s interpretation is most likely the audience favourite. A significant element of the choreography is ‘fall and recover’, with each recovery exploding into something different – turns, leaps, solos, duets – all of which heightens one’s appreciation of the music. Marin’s approach is also more contemporary than that of Childs, who takes a more ‘classical’ approach.

The fascination of this event is that the dance allows the music to become more accessible. One finds much more in the music by seeing it performed by dancers rather than by only hearing it performed by musicians. That might be said of any ballet, but in this case the Grosse Fugue is altogether quite a different musical beast.

The Adelaide Festival has presented us with a masterpiece.