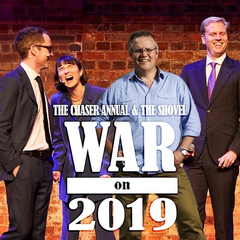 Adelaide doesn’t always get a stop on the tour by this mob, and Saturday night’s one-off was sold out. Warm anticipatory applause at the opening betrayed a seasoned audience who would be familiar with urbane James Schloeffel’s satirical fake news website theshovel.com.au and disheveled Charles Firth’s The Chaser range of products. Or maybe some have already attended the wars waged and won in 2017 and 2018. Egads! When the dynamic duo review the shenanigans of 2019, month by month, you realise there is a lot of shit to shovel.

Firth and Schloeffel are like-minded liberals with a similar aching ear for the absurd behaviour taking place in our right-facing world. Their huge experience in political commentary results is an onslaught of razor-sharp insights and sardonic satire that is returned with laughter and applause.

And what a year it was. Using moving image as a backdrop, they jog our memory on wobbly Bill Shorten out for his morning runs. There was only one election poll that was consistently correct for two years – Bill Shorten was not the preferred prime minister. Meanwhile, our coal-cuddling koala preferred PM was lampooned for his baseball caps and his “she’ll be right, I’m one of you” attitude. Peter Dutton was mercilessly and personally attacked for the shape of his head, which was symbolic of his well-honed hard line as Minister for Immigration 2014-17. Cruel but funny. Looped footage of a media-savvy teenager smashing as egg on Queensland MP Fraser Anning’s head said a lot about them and therefore us. My highlight of the show is the ten questions of advice sought from Israel Folau along the lines of, “I cut off my wife’s right hand in accordance with provisions in the Old Testament and I’m entitled to enslave her, but she only has one hand. What should I do?” Also in the religious vein, Cardinal Pell was particularly pilloried. Firth showed us doing some The Chaser-type mischief in attaching a brass addition to a bronze plague of Pell’s achievements, labelled, “and convicted pedophile (sic).” Sticking to Australia, Morrison’s like-minded leaders, Donald Trump and Boris Johnson, make only cameo appearances, but Justin Trudeau is black-faced with embarrassment.

It is a little daunting to witness such a hefty catalogue of blatant misbehaviour, misinformation, misuse of power and phony missives, so Firth and Schloeffel spliced their monthly catalogue with relief skits from some additional talent. Mark Humphries is a handsome television personality who got his TV start hosting ABC’s The Roast, and he has continued his satirical political commentary on SBS Viceland’s The Feed and on Thursday’s 7:30 current affairs show, as well as contributing to The Chaser’s Australia. He was wonderfully ebullient and off-kilter playing several roles including himself as a quiz master with three contestants shanghaied from the audience - a highlight of the night. Victoria Zerbst and Jenna Owen are comedians and satirists who also contribute to SBS’s The Feed and many other programs on TV and radio. They spiked the show with some serious froth and bubble. All presenters wrote their own material. If you’re accustomed to Fringe stand-up comedy acts, you’ll be tone deaf to the f word; if not, one might say go Folau yourself.

The War on 2019 – Live! is a horribly amusing night out. While not having the class of Jonathan Biggins’s, Drew Forsythe’s and Phillip Scott’s The Wharf Review with its songs, dance, impersonations and 15 years of experience, The War sensibly only charges half as much. You couldn’t get a better deal.

PS - Do not despair missing out on The War… You can always try next year, but also, Firth and Schloeffel will be returning for the Adelaide Fringe 2020 from February 18 to 23 with The Anti-Expert’s Guide To Everything - a butt-kicking diatribe on flip-flop science, vaccine-deniers, regurgitated fad diets and all the other dangerous rubbish we don’t take enough time to de-bunk. Their websites are 24/7.