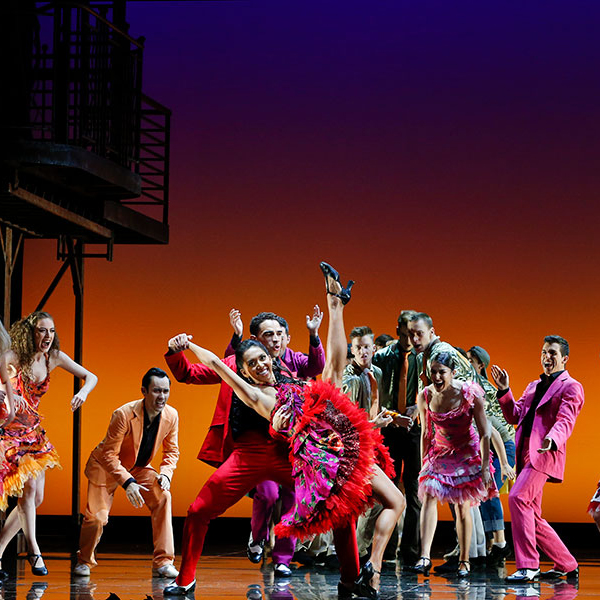 It’s a well-known tale; unrequited love, fear, hate, tragedy. Whether told through the guise of the Montagues and Capulets, Catherine and Heathcliff or, as in this case, the Sharks and the Jets, it is undoubtedly emotionally charged.

This BB Group production of West Side Story is as traditional as it gets. In fact, one might be forgiven for thinking one had seen this set before (Design, Paul Gallis). The costumes are lavish and winsome (Design, Renate Schmitzer), the songs are reliable and would satisfy the expectations of a die-hard fan (Musical Supervisor, Donald Chan), and the storyline doesn’t deviate from its original Broadway big brother. But the wonderful young Australian cast, of which many are making their professional debut, doesn’t quite have the emotional chops to fully render this heart-breaking tragedy.

Of the performers there is nary a bad dancer. The cast is brimming with lithe movers and shakers, all relishing the hectic choreography (Director/Choreographer, Joey McKneely). It is edge-of-your-seat stuff and the highlight of the show by a long shot. McKneely’s production is more stylistic than naturalistic, and moments of poignancy are often at risk of slipping into melodrama. Despite being visually stunning, at times it is emotionally vapid.

Of the top billed performers it is Sophie Salvesani as Maria and Chloe Zuel as Anita who steal the show. Salvesani has a beautiful operatic tone that just devours the Sondheim and Bernstein music and lyrics. Zuel has an electric presence whenever she graces the stage and one cannot take one's eyes off her. She has an emotional maturity that really grounds her delivery. America, led by Zuel, is a show-stopping highlight. Tod Jacobsson grapples with the difficult role of Tony, and does admirably. Vocally he has an interesting tone and he sings beautifully, though not always blending with Salvesani, and much to his own detriment.

Opening night suffers from a low overall volume. The orchestra is in fine form and sounds sublime, but vocals are often lost and words gabbled amongst the Puerto Rican accents or low microphone levels.

It is a promising young cast brimming with Australia’s most promising professional musical theatre performers. They deserve our support, and one hopes their effort and energy earns them healthy houses every night.