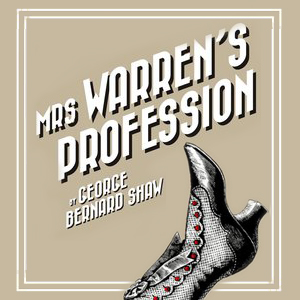 George Bernard Shaw (1856-1950) didn’t die until he was 94 and some of his contemporary critics would have said not a moment too soon. He lived through the latter half of Victoria’s reign, two world wars, and saw air travel evolve from none whatsoever to commercial jets. He wrote his last play the year he died from complications after falling out of a tree he was pruning, but he had already won the Nobel Prize for Literature 25 years earlier. A late starter with the ladies, he certainly made up for it and manifested his great respect for the struggles of the fairer sex, and many other issues of social injustice, wage inequality and morality in a great canon of plays, including Independent Theatre’s current offering, Mrs Warren’s Profession.

The fishnet-clad, booted and shapely leg on the publicity and programme cover designed by Nicholas Ely leaves little doubt what is Mrs Warren’s profession. However, she is not a practitioner but an employer of sexual service in Europe’s major cities when such a thing provided a legitimised need at the time the play was written in 1893. Shaw sets up this delectable dichotomy of an independent, self-made and successful business woman who is also potentially exploiting white slavery, or is she providing high-earning jobs to liberated women?

In Shaw’s play, however, she is what she is, and he takes copious amounts of time having her explain the delicate situation to her daughter. The narrative then really focusses on her daughter’s acceptance or rejection of her mother’s profession. Unfortunately for drama, her daughter is also what she is, and indeed, no character during the course of events seems to undergo any change whatsoever in their lives. Arthur Miller took the situation of a virtuous progeny faced with the dubious morals of a parent in All My Sons and made a ripping proper drama out of it oozing with conflicted souls and culminating in heart-breaking tragedy. By comparison, Mrs Warren’s Profession is a moral walk in the park.

Nonetheless, this radio play has some interesting and thought-provoking moments. Certainly, Shaw’s observations on social injustice and capitalism evoke shame in realising that much of what we feel is wrong with the world today is so intergenerational as to signal a systemic dysfunctionality. Eloise Quinn-Valentine as Mrs Warren’s daughter is convincing as an egghead calculating her feelings by converting them to algebra. John Roben is magnificent representing free-wheeling finance and conveying the air of a tycoon used to buying anything he wants. Independent’s omnipresent actor, set designer and constructor par excellence, David Roach, provides a memorable vignette of a hangover. His Reverend Gardner easily cedes control of his life to son Frank who is solidly played by Patrick Marlin with carefree confidence and playfulness. John Oster has an ancillary role to the proceedings but launches the first scene with unhelpful haste. Pam O’Grady appears on stage with script in hand on opening night as she is gratefully filling in for the late withdrawal of the actor now not fulfilling the eponymous role. Even with the script in the first act, she is every inch a charismatic Mrs Warren in voice and manner, besides looking splendid in her period costume (no costume design credit provided). However, where drama might be conveyed the climactic confrontation with her daughter, director Rob Croser has the actors far apart and with a distracting script in tow, the momentum dissipates as Ms O’Grady cannot unleash. No doubt, as the season progresses and she has caught up and the scene is properly rendered, the conflict could be quite fetching.

A philosophical triumph and an indifferent drama, Mrs Warren’s Profession deserves respect for Shaw’s proactive voicing of social issues in theatre all those years ago, and Independent’s production is a compelling insight into the author and his times.