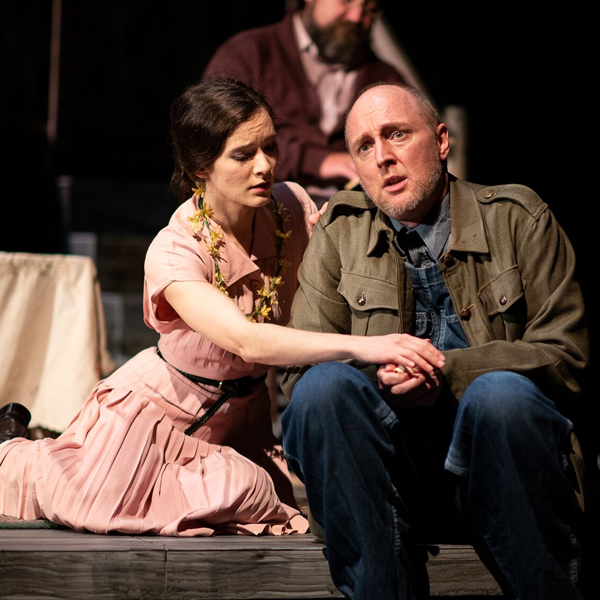 Christina’s World is the second of three chamber opera productions by the State Opera of South Australia in its Lost Operas of Oz series. (The first was Boojum! and the third will be Madeline Lee.) The premise of the series is simple: opportunity to hear more opera composed by Australians, even if not on the main stage, and revival of works that for whatever reason have been infrequently performed. For some, the very existence of the series has been somewhat contentious, but for others, Boojum! and now Christina’s World have opened a whole new domain.

Composed in the early 1980s by iconic and much loved Australian Composer Ross Edwards, with libretto by Dorothy Hewett, the opera takes its inspiration from Andrew Wyeth’s famous painting of the same name, but the connection is rather slight. Knowing anything about the enigmatic painting, and this reviewer has admired it at the New York MOMA where it proudly hangs, doesn’t really give one real insight into the opera. The storyline is rather bleak and touches on a number of disturbing themes, including infanticide. In fact there is likely too much happening, and in barely an hour and with four of the five cast doubling roles, there is insufficient time to explore any of the themes in any great detail. There is no expansive narrative in which to luxuriate, there is no detailed character development to contemplate, but there is Ross Edwards’ wonderful music and there is some superb singing, particularly from (mezzo) soprano Charlotte Kelso and tenor Nicholas Jones

The plot focusses on the central character Christina and looks at key aspects of her life (and of her family) as they play out in and around the family home. It is almost a case of “if these walls could talk”, and this is perhaps the most obvious connection with Wyeth’s painting – a house that has seen much but obscures its secrets. Christina has a degenerative disease that impacts her physical mobility but she is beautiful and generous in spirit. Christina (Charlotte Kelso) has a brief relationship with and falls pregnant to Tom (Nicholas Jones). He is long gone by the time the child is born and Christina desperately ‘commits’ the child to the embrace of the ocean. (Her own mother had committed suicide by drowning herself in the sea.) Later Tom’s dead body is found – we don’t know the circumstances of his death, but we can easily imagine that Christina’s mentally ill Uncle Harry (Adam Goodburn) might have been responsible, or her father (Joshua Rowe), or even herself? The narrative darts backwards and forward between the present and when the events took place. We see it all from the perspective of the young Christina and also the middle age Christina played by the impeccable Elizabeth Campbell whose character starts and ends the play.

Edwards’ score is episodic and suits the busy segmented nature of the plot, and conductor Warwick Stengårds’ describes it in his programme notes as “dance-like” and “lyrical”. Indeed, the lyricism of the arias sung by Kelso and Jones are a highlight of the composition.

Christina Logan-Bell’s set design evoked the very essence of Wyeth’s famous painting (especially the grassy plants in the foreground which draw their inspiration from the painting’s filamentous brush strokes), and Ben Lett’s lighting design effectively includes several projections onto the walls of the house and outbuildings to underline the drama.

The twelve piece orchestra was excellent, Mitchell Berick’s work on clarinet was exceptional and Sami Butler’s percussion was precise. At times, the ensemble risked obscuring the vocalists, but this is perhaps inevitable in the tight confines of the Opera Studio.

Nicholas Cannon’s direction with an awkward story line was tight and effective.

This is a production of which State Opera can be justly proud, and the capacity audience was rightly generous in its applause and very much appreciated that Ross Edwards himself was in attendance.