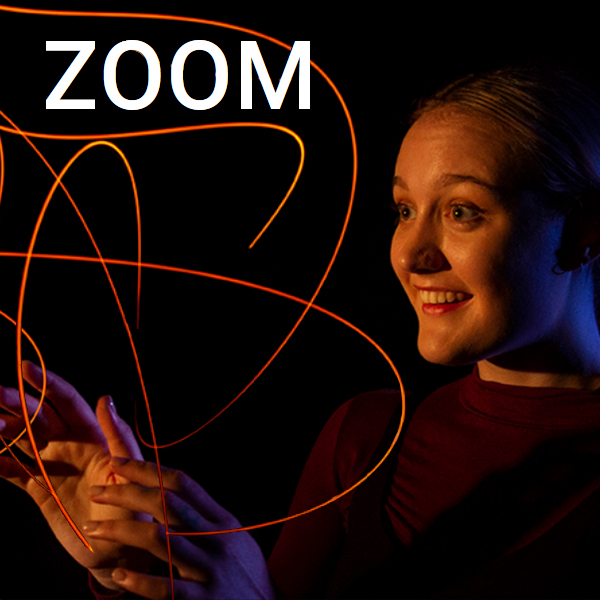 That is the mysterious advice given to audience members as they file into the Space to see Zoom.

They now are in possession of strange round clear plastic objects which glow bright with dots of blue light.

As the lights dim in the theatre, the audience glows in the dark.

Softly lit onstage are a bed and a hanging lightshade.

Temeka Lawlor appears. This is her bedroom. She has one of those blue lights, just as the audience does.

She caresses her light and waves it in greeting to the audience. Instinctively, the audience of four to eight year-old children and their parents reciprocate with mimicked action, and the auditorium is alive with a joy of little blue lights - and curiosity.

The ensuing entertainment is a voyage of surprise and wonderment.

It is the new Patch director Geoff Cobham making his mark on children’s theatre. Cobham’s claim to fame is lighting design and here is a show about light, the beauty of light in the black box world of the theatre.

Lawlor mimes with her wee light and with lines of light and with walls of illuminated illustrations. Wild, zany linear creatures emerge and animate in a thrill of black light artistry. Lawlor, with her mostly invisible black-clad onstage partner Angus Leighton, wields light sabres and flashlights and lasers. A black and white world produces rainbows. The human being turns into a line drawing.

Ironically, for this work of sophisticated modern technology, Cobham has used the old-school picture book of Harold and the Purple Crayon for inspiration.  Harold created his own world in line drawings and so does Lawlor, only speaking aloud towards the end of the show when the audience’s mass of little blue lights are called into interactive action. With Jason Sweeney’s simply wonderful music - soothing, evocative, exciting, exuberant and illustrative in its own way - she brings the 45-minute show to a disco wonderment of a climax. "How did you do it,” she asks the children as their lights all change colour. How, indeed. Impeccable technical expertise, is how.

Zoom is a simple story of a child in the dark, of imagination in a bedroom. It is an eloquence of mime and a bravura performance of computer wizardry.

Credited along with Cobham for its creation are the two performers, along with Dave Brown and Roz Hervey. The technical design is by Alex Hatchard and Chris Petridis with animation by Luku.