A Night at the Theatre 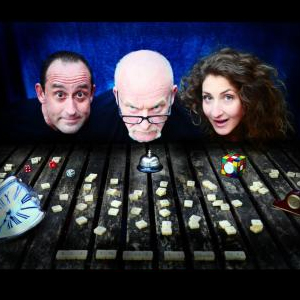 STARC is presenting five of Ives' short plays from his collection All in The Timing. And, indeed, for the two performers, Stefanie Rossi and Marc Clement, it is all in the timing. It is fast and furious and lateral and stopwatch. It is machine gun fire, reactive, nonsensical, wise, witty, imaginative and generally fairly unexpected. Thank dog for performers of the calibre of Rossi and Clement.  The whole thing would struggle without such timing and dramatic agility.  They are a dauntingly brilliant team.

The Bakehouse stage is dressed with lines of folding screens, several tables and chairs and is snappily lit by Stephen Dean. Knight occupies one table for the first play, Sure Thing, which is a zany, quick reflex exercise in alternative reactions. Knight pings the shop bell to cue the segues in the evolving alternative conversations between a couple meeting in a cafe. It is quick and clever and lots of fun.

In Variations on the Death of Trotsky, Clement appears with a comic false nose and a wig embedded with a mountaineering axe and proceeds to demonstrate imagined variations on the theme of Trotsky’s death the day after the axe attack. Nasturtiums and pratfalls. Rossi, with a lovely clipped Russian accent, is a fine foil as his wife. Again, fast, funny and eccentric.

English Made Simple played games with pickup lines at parties, the potency and potential prescience of first impressions. Rossi and Clement throw introductory lies at each other like spit-balls. What’s in a name? Names rattle rapier-like off the tongue and one wonders.

Long Ago and Far Away is a deeply existential and rather dark and longer piece. The audience, used to the verbal acrobatics of the earlier pieces, grows restless, and then thrills at the artistry of the ending. Director Knight, rushing around onstage to set up the next playlet, suggests that audience members talk among themselves about it. “We don’t understand it, either,” he jests.

The Universal Language is the grand and gorgeous finale. A stutterer seeks fluency in a new language. Rossi stutters, with the same expertise with which she does everything else and Clement as teacher in red fez talks in a complicated zany gibberish in which all manner of bizarre words and names may or may not be elicited. It is a very funny, clever, and touching little work - and a tour de force by the two wonderful actors.

This torrent of entertaining absurdity is over in only 75 intense minutes, and the audience erupts out to the bar to drink to the pleasure of the experience.