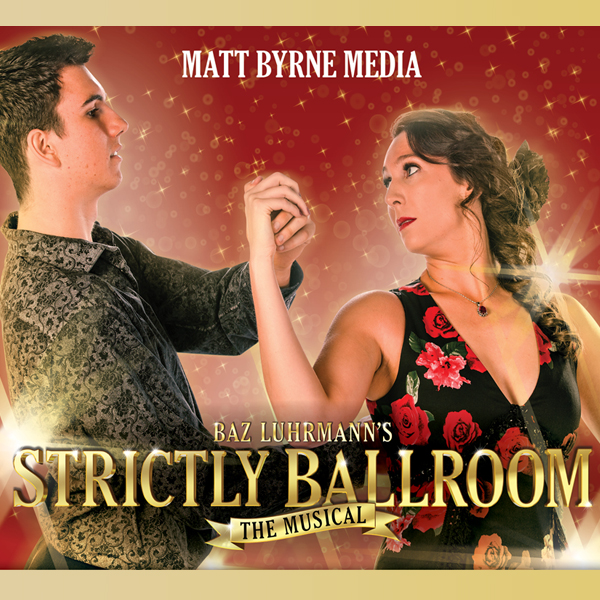 In 1992 Australian screens were graced with an unlikely multi award winning romantic comedy from film director Baz Luhrmann. Strictly Ballroom dives into the world of competitive ballroom dancing in Australia as it brings together unlikely partners Scott, the award winning open-amateur, and Fran, the beginner, to try and win the Pan Pacific Championships on their own terms.

The well-worn tale sees the duo from opposite sides of the tracks challenge the status quo, fall in love, and discover what is truly important to them – living and dancing from the heart.

In 2014, the musical version of that film premiered in Sydney.

Director/Designer Matt Byrne has cast two wonderful young performers in the lead roles of his production. Kurt Benton plays Scott Hastings and dances rings around the stage. He is a spectacular dancer and has taken to the ballroom style with ease. As his dance partner Fran, Kate Harrison is a shining light. Harrison brings an instant presence to the stage whenever she graces it. Her performance is measured and connected, and when she sings everything else fades away. Harrison and Benton’s duets are just delightful.

The film famously balances the farcical, overplayed Australian-isms with beautifully drawn, honest characters and an enduring love story. Byrne’s cast successfully captures the comedy of the piece but, despite Benton and Harrison’s hard work, the love story is thwarted by the writing.

The evolution of Scott and Fran’s relationship is virtually non-existent in this musical adaptation. Despite well-known songs like Time After Time, and Love Is In The Air tugging at the heart strings, the romantic arc for the two is underdeveloped; one minute Scott seems almost to despise Fran, the next he is confessing his love for her.

The complexity of mounting a show which requires such specialist dancing skills cannot be understated. Here Byrne and his choreography team of Tara Johnston and Thomas Coghlan have excelled. The ensemble dancers are well drilled in the ballroom dancing style and the untrained ballroom dancers easily mix it with some of South Australia’s competitive best.

Unfortunately, the same cannot be said for the mix of singers. The adaptation is already lacking in memorable numbers and unfortunately, with the exception of the leads Benton and Harrison who carry the show, the singing by the supporting cast is very hit and miss.

Musical Director Jessie Budel’s orchestra sounded a tad strained on occasion during this performance; the balance of dialogue, music, and ensemble levels was patchy and often wasn’t hitting its mark. Anne Williams has created a stunning array of costumes however, and much of the visual success of the show rests on the spectacular outfits. Byrne has designed some standout scenes in this production where all of the elements including the lighting design by Rodney Bates (operated by Mike Phillips) work perfectly together. Most notable is the rooftop dance rehearsal where Scott and Fran first sing Time After Time.

The larger-than-life cast is full of characters that will warm your heart, and take you on a pleasant trip down memory lane.

Strictly Ballroom plays at the Arts theatre until the 13th of July before moving to the Sheldey Theatre at Elizabeth from July 18 to 27.