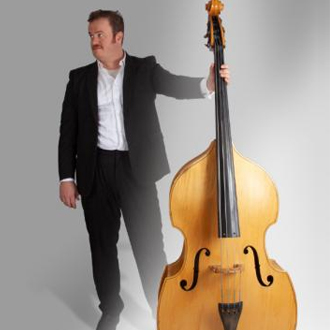 There on the black Bakehouse stage stands the blondewood double bass. Large and solitary. Waiting for its player, its purpose.

Or so one may assume on entering the theatre.

But then Eddie Morrison arrives in the character of the nameless double bassist of German playwright Patrick Suskind’s one-hander script.  He’s a dishevelled fellow with a couple of beers in hand and he soon makes it clear that they’re just the starter drinks. He has a cocktail bar beside his record player and, as he plays snatches of classical music, he pours, mixes and consumes a daunting assortment of drinks.

He expounds comprehensively on the role of the double bass in the orchestra. There can be no orchestra without it, he avows. It is more important than the conductor. It is the cornerstone. And yet, alone, it is bereft of compositions. And it is destined to dwell at the back of the orchestra.

It is from there that this double bassist has fallen in love with Sarah, the soprano. Unrequited love. She has never noticed him. The drunker he gets, the more vehemently he laments his lack of love. What woman would want him, he moans. And, it’s a good question. He’s an histrionic loser.

Morrison takes his shortcomings on board with a passion. He descends into a wallowing mass of musical facts. He rattles off streams of composer names and snatches of biographical minutiae. Dittersdorf is a goodie. Schubert is a love. Mozart is overrated. He draws chalk diagrams on the black walls. He drinks and slumps.

Oddly, he barely plays his double bass at all. It stands there on stage, a huge pale presence.  One starts to pity it. And, indeed, as the play progresses, the bassist gives one cause. Theirs is a deeply sad and dysfunctional symbiosis.