I Forgot to Remember to Forget 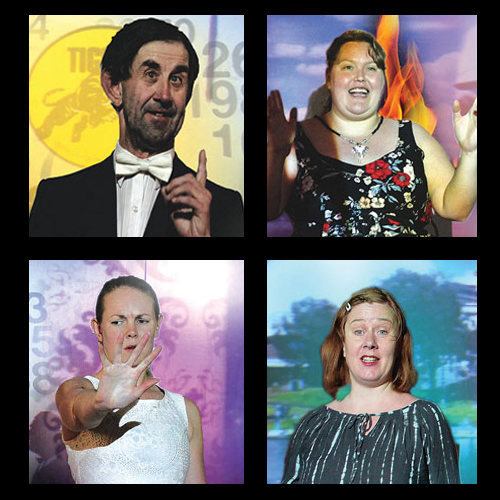 With one of the most interesting titles in showbiz,  Alirio Zavarce’s production for No Strings Attached gently raised the roof with its Australian premiere performance at the Space Theatre.

This disability-theatre show lines up six performers with a history of memory issues under the direction of devisor and dramaturg, Zavarce, to present separately and together accounts of the frustrations and ensuing humour of diverse disabilities.

In a work about problem memory, the fluency and proficiency with often challenging sets of lines are both triumphant and ironic. The cast seems word-perfect albeit that Zavarce warns the audience that it may not remember things and, anyway, who does remember things and isn’t it strange how remembered things can change? Thus, in essence, this theatrical piece turns out to be a wonderfully complex philosophical exercise to which absolutely everyone can relate. It also is explanatory of various aspects of memory damage, from stroke to trauma.  The protagonists tell things their way.

For Adelaide’s theatre community, the return to the stage of actress Michaela Cantwell to tell her story is a sensational highlight. Cantwell was a golden and beloved talent on the Australian stage before a catastrophic stroke forced her to re-learn even the most basic things in life. Here, under the tender directorship of Zavarce, she tells simply and powerfully the story of that shocking disconnection and the process of retraining her body to the most fundamental obedience.  There is no self-pity in this tale, just a wise sense of fatalism. She does not know her future but it will be great, she avows. Everyone cheers because already it is great. She is here onstage again and if there is one thing adversity has not stolen from her, it is that magic thing called “stage presence”.

Kathryn Hall is an old hand with No Strings, which company is now 25 years old. She's an infectiously bubbly performer and as a primary-memory tale, she tells of the joy of cooking stuffed peppers because they remind her of her father. She also reminds the audience about the importance of noting the numbers of the bus on which one rides. Wrong number can take one anywhere. She knows.

But it is Kym Mackenzie who has the bus memories wrapped up with bus route numbers and fares and times. As he tells his public transport tale, the numbers mount up as projections on the sliding panels behind him until he is standing in front of a veritable crowd of numerals.  This device of flowing memory projections on panels and backdrop big screen is fundamental to the show’s design. The No Strings tech team, affectionately known as the “creatives”, has engendered further life and zest to the show with this artful lighting, sound and image.

Cassie Litchfield’s profile presentation is heartbreaking. Standing in front of these projection panels, she shares childhood happy snaps, warm and fuzzy memories of loving days with her father, before mental illness tore their world apart and left her childhood scarred with pain.

Duncan Luke completes the cast with his account of things remembered and forgotten.  He’s one for losing things: cigarettes, the remote, even his mother. His list is long and droll.

Zavarce binds together the facets of the show in a heartfelt, deeply touching existential reflection.  Memory is common to us all. It is each one of us, flawed and fabulous.  Everyone forgets, some more than others. Some through accident and illness. Some forget their own identity. What we must do, says Zavarce, is make sure not only to remember each other, but to remember for each other whenever we can.
He brings up the house lights so the cast and audience can look each other in the eye, imprint the experience on their memories, and share a meaningful moment.
He philosophises about the pain and beauty of memory, the associations which engender memories, the cruelties of life, and the importance of finding and offering understanding, patience and solace.  It is altogether beautiful and profound, in a very significant night of theatre from an exceptional company.