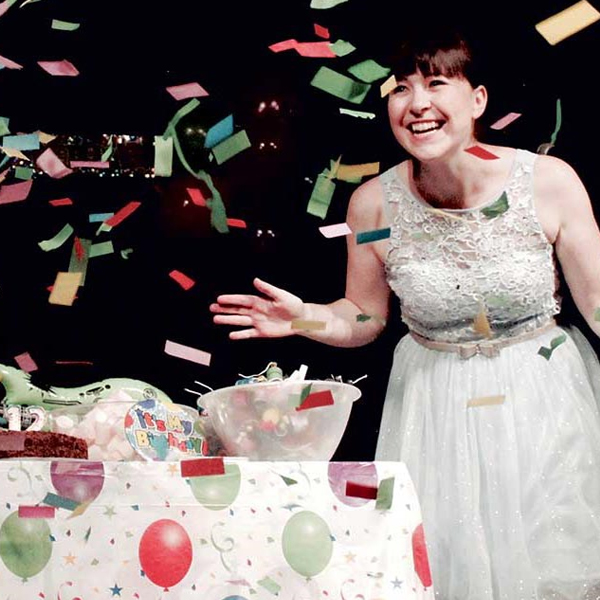 Mary-Frances Doherty is a Belfast performer who has come here to show 12-year-olds that their joys and sorrows are pretty much the same all over the world.

She plays Katie in her nice sparkly birthday frock, hosting a party a bit half-heartedly because her best friend has gone to another school and another party and, well, she is bereft. So thanks, audience, for coming to this party for which she has piled a table with marshmallows and party poppers and blow-up toys. And thus is the performance an offbeat interactive party with audience children being asked to play Truth or Dare and do little turns or admit things. Some questions hit the right targets. One child was thrilled to expound on her sporting success. Another admitted her friends thought her too loud and “I don’t have an indoors voice”. For one very shy child, being asked to sing a song in front of all those strangers was deer-in-the-headlights hell. Talking of which, Katie has to answer the “truth” question of her most embarrassing moment which, she admits, was not getting to the loo in time. The children won’t be forgetting that little scene for a while. Pleasingly, when Katie has made a real mess of the room and starts resignedly to clean it up, little girls rise unbidden and swarm out to help her. It is a nice reflection on the nature and upbringing of our children. Despite the fact that, at the end of the 50-minute show, everyone is invited to share in the chocolate birthday cake, the children afterwards reflect that they didn’t really expect Katie and her party would be so sad. Fear of missing out and fear of being rejected by friends is common to them all.