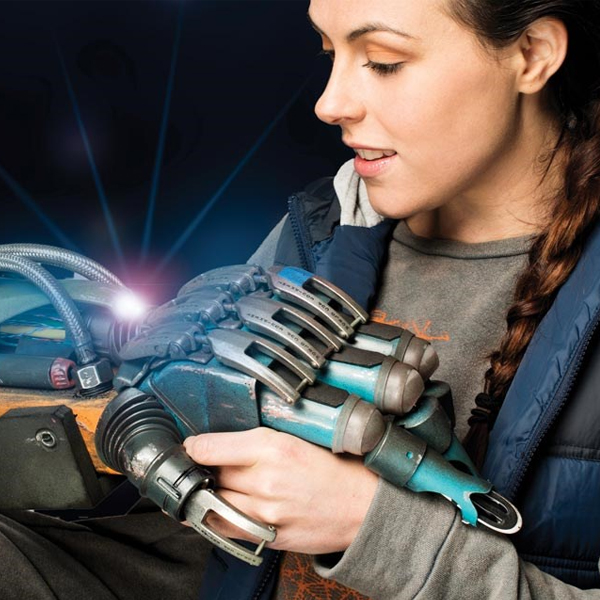 If being an autistic child is challenging, then so, too, is being the parents of a child on the spectrum. They not only feel the pain of their child’s battle against the odds of being different but they are burdened with the loving task of trying to find explanations and solutions for their child.

And so it goes in Robot Song.

In its DreamBig promotional material, this interesting hour-long musical creation purports to be the story of Juniper, the 11-year-old school girl who has received a spiteful hate letter from other school children telling her that she is a robot and should never have been born. While the production is delivered as Juniper’s show about her own true story, it is really, and extremely touchingly, the tale of a darling, doting dad tip-toeing his way through the emotional maelstrom of autism to find peace and confidence for his daughter. He is ever there behind her, backing off when she resists, nourishing her self-esteem and enabling her projects.

Juniper’s parents both are artists, so she comes from a free-thinking, non-conformist environment in which it is not at all peculiar to have a giant rubbish skip as a magical best friend in the back yard.

With an appealing cartoon face on its front, the big bin furnishes the stage very colourfully. When the show opens, it is mum on the keyboards and dad with a laptop and a table of paraphernalia flanking Juniper who is centre stage with a standing mike. She makes one of the great entrances as a robot blazing with lights; desk lamps and torches rigged all over her. It’s part of the dad-ingenuity world. She introduces her show in a dither of uncertainty and then, gaining confidence, lets the audience know that she is an imaginative character who loves dissecting words: there is an “us” embedded in the word music; and “eat” is in “breathe”. She tells us that she writes songs, loves robots, and knows stuff.

Performer Ashlea Pyke has a wonderful Broadway voice which gives substance to the professionalism of this beautiful theatre piece which has come from Bendigo.

It is based on the life experience of its writer and director, Jolyon James.

It is musically very strong, with its fabulous score delivered live on stage by pianist Jo Abbott in the character of Mum while Phil McInnes darts, dives, and dashes around as the devoted Dad. McInnes has a lovely stage presence and he moves with a dancer’s grace and precision.

The hour-long story evolves through added interactions with cartoon characters on a big screen, a touch of audience involvement, letters fluttering like birds, much interpretation of robots and schoolyard bullying, and a great, big spectacular denouement.

The ostracisation of the outsider is turned around with the assertion that no two people are the same, being different is not only okay, believe it or not, but it is the way of the world and is nothing less than “awesome”.

Diversity rocks. And so does parent love.