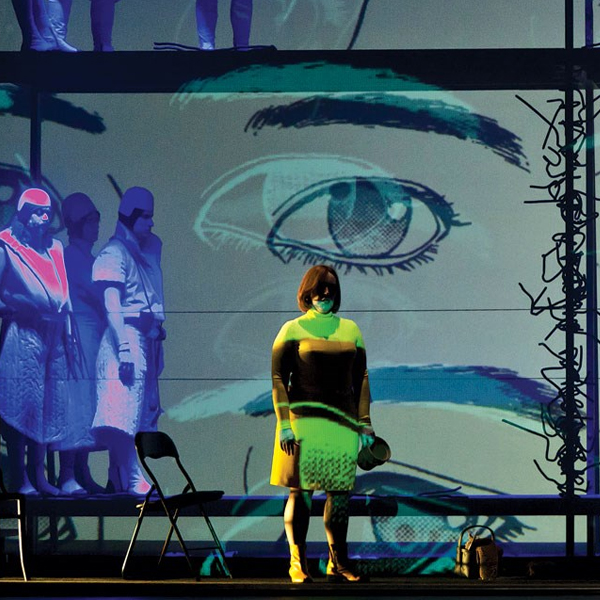 War Sum Up is billed as a contemporary opera, but that doesn’t adequately describe it. In fact, it’s almost misleading. The word opera connotes a number of things – music, quality ‘art singing’, libretto, costumes, scenery – and one has seen and heard many so-called contemporary operas. But War Sum Up stands apart and is in a remarkable world all of its own. For someone who is ‘opera-shy’, War Sum Up should not be avoided for that reason. If anything it should be embraced, because it is so different.

Visually, War Sum Up is nothing but spectacular – it’s a celebration for the eyes. The set comprises a narrow but tall two level stage that traverses the width of the Dunstan Playhouse; almost like two levels of scaffolding. A full translucent scrim is located at the front of the scaffold and another at the rear. On these scrims are projected a bewildering array of evocative Manga-esque images that enlighten one moment, confuse the next, and always enthral and disturb. The scenery is thus dynamic. The cast of twelve are located on the two levels and they strike various tableaus that evoke classical dynastic Japanese art; they are dressed accordingly. The lighting is a highlight of the production, and at times is beautifully surrealist with its strong iridescent electric colours and piercing contrasts.

And then there is the singing. Performed by members of the Latvian Radio Choir, the libretto is performed with exquisite precision and articulation. Each voice is amplified, and the sound engineering is just first-rate. Conductor Sigvards Klava has perfect control of the choir and keeps them perfectly in time with the recorded sound track that is a stylish yet eclectic blend of modern classical (whatever that means) and electronic synthesised sounds. Klava is a joy to watch.

So, what is it all about? War Sum Up is an account of warfare told through three characters. The first is a Western Soldier who returns home suffering from post-traumatic stress and struggles to assimilate back into society. He returns to war but is killed. The Manga images that illustrate his journey bear visceral. The second is an Islamic Warrior who is killed in battle and whose soul struggles to find peace. The third is a spy who is captured but escapes after she transforms herself into a super being, or maybe she just escapes into a hidden place in her mind. All this is contrasted by a civilian woman who goes about daily life amidst the carnage because she must: there is the theatre of war, and there is the theatre of normal life, which goes on as best it can despite the odds.

This is challenging theatre, and if the symbolism is at times difficult to follow, the visual and aural cornucopia makes up for it!