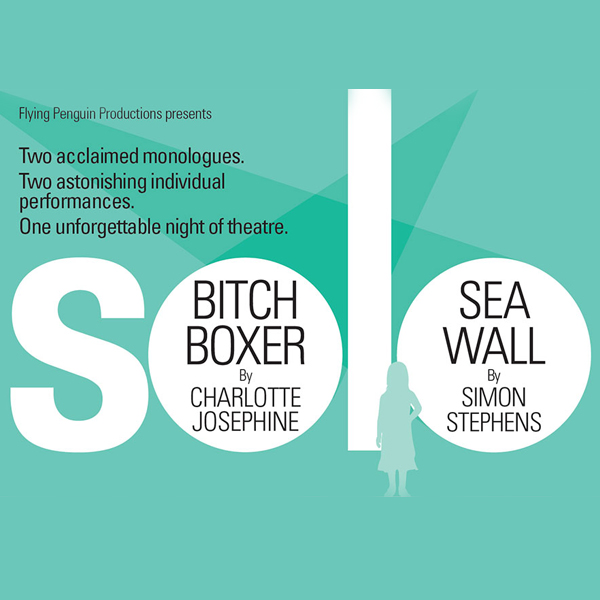 Flying Penguin is airborne again with this shining night of two one-hour, one-act, one-actor plays under the title Solo – it’s a format of theatre that we are used to seeing during the Fringe that doesn't get much of a look-in the rest of the year.

Bitch Boxer was big box office during the 2014 Adelaide Fringe when artistic director Martha Lott of Holden Street Theatres brought the show from Edinburgh, and it has the same punch in Jordan Cowan's performance under David Mealor's direction. Bitch Boxer was British performer and playwright Charlotte Josephine's first play for which she won the Soho Theatre Young Writers Award in 2012, while the Adelaide production won the Fringe Award in 2014. It's a high octane, heart-warping story of the resilience and gumption of a young lady from Leytonstone aiming to be one the first female boxing Olympians. Her trainer, her coach, her mentor, her guiding light - her father - passes away early in the proceedings and Josephine, channeling through Cowan, reveals to us a doubly determined Chloe with all her flaws warping and weaving her way to winning.

Mealor and set designer Kathryn Sproul arrange the tiny studio space at the Goodwood Theatres with the audience sitting in bleachers around a boxing ring. But Cowan left me behind as she rushed through the opening scene with unfocussed energy and blurred speech. However, she shook this off and settled into the business of having Chloe box her way out of grieving. Movement director Toblah Booth-Remmers and boxing coach Robart Rijkelijkhulzan aided Cowan in matching a boxer's moves, but the more poignant moments - found in the rituals of boxing: wrapping on the knuckle tape, strapping on the gloves and the excruciatingly tense minutes before the match - really connect. Cowan was magnificently matched against herself in a whirling fight so exciting I wanted to cheer. I miss my father too.

Actor Renato Musolino is an Adelaide treasure and very likely you have already seen him in a Flying Penguin or State Theatre production. (He'll be in State's The Gods of Strangers in November.) In Sea Wall, British playwright Simon Stephens takes a simple tale of a mishap and transforms it into an ethereal and heart-breaking exploration through metaphor and meaning. And Musolino is your man to perform it. Looking diminutive and vulnerable from the onset, character Alex lets us into his life, a life with his wife and daughter so perfect that there is no need to have another child. They even holiday at his father-in-law's seaside villa in France. But something is going to happen...me thinks. Brace yourself. Musolino conveys the necessaries with direct and frank exchanges with the audience and it feels like he's talking only to you. He is wholly in the moment and drags you right down in there with him. Dramatic tension and mood expression are beautifully heightened with Quentin Grant's composition and sound design, and Chris Petridis's lighting. Director David Mealor keeps it so simple and so beautiful, focusing on Musolino's rendition. Bravo!