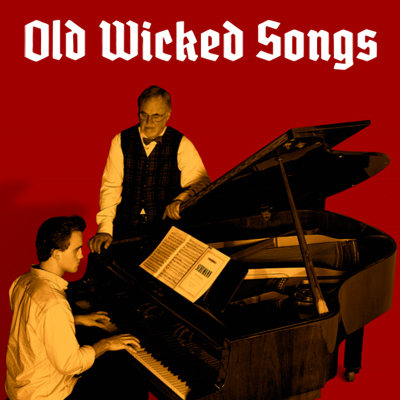 Sadness and joy. Therein lies a balance so delicate and beautiful that it has been the great creative quest of poets and composers. Or so asserts this marvellous musical two-hander by Jon Marans.

It explores the evolving relationship between a brash and disgruntled young American prodigy pianist and the ageing Viennese music professor intent on proving that one may be a better accompanist if one understands the music from the perspective of the singer. The singing lessons upon which Stephen Hoffman reluctantly embarks become, over time, a deep lesson in life and love as well as music.

This Pulitzer-nominated play lingers upon the poetry of Heinrich Heine and the Robert Schumann song cycle, Dicherliebe. It also focuses on the power of language and the complexities of being Jewish.

Professor Mashkan is not the great piano teacher Hoffman was targeting in his trip to Vienna to vitalise his stalled music career. Singing lessons from Mashkan, a quaint and curmudgeonly old fellow, come as an unwelcome surprise imposed upon him as a preparation for work on the piano.

The play is set in 1986 with the impending election of Kurt Waldheim and the tourism-related restorations of Dachau strongly colouring its background.

David Roach embodies the intriguing old professor in an extraordinary performance which grows and grows as the play slowly reveals more about the old man. Director Rob Croser has embellished this process with some exquisite touches, most particularly and surprisingly in scene links on the darkened stage. Roach mimes the piano playing and he is no great singer. He is, however, one of the fine actors of this city and this role is a jewel of a vehicle for him.

Ben Francis has the privilege of playing against him as the angry young American. Francis is a wonderful singer and he has to rein in this talent to portray a man for whom singing is a secondary skill. He does not downplay the emotional aspects of the recalcitrant student snapping and sneering disrespectfully until one wants to smack him. This extreme behaviour must be close to the bone since playwright Jon Marans has said this play is semi-autobiographical and he was right there among those on their feet applauding the performances on opening night.

But, for the audience at the end of the night, the play belonged to the pure profundity of Roach’s characterisation. It was his.

The first half of the production is fairly slow going, setting up the denouement with a great deal of musical exploration and explanation. The audience finds itself quite literally present at a series of music lessons. After interval, the narrative takes off and is absolutely gripping. No spoilers.

The protagonists take turns at playing the grand piano and the sound is quite convincing that this is so. However, the true musical expertise comes from offstage and the hands of the masterful Mark Sandon.

The play’s lighting is absolutely superb, thanks to Bob Weatherly, and the set by Croser and Roach is extremely lush and busy but quite perplexing with its giant white pillars and asymmetry.

Fortunately, it’s the performances that count, and they are indeed ovation material.