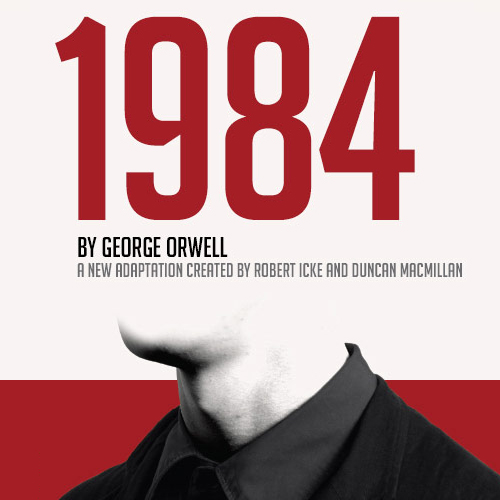 The much anticipated stage adaptation of cult science fiction novel 1984, which – along with Animal Farm – brought George Orwell worldwide fame, finally opens at Her Majesty’s theatre. The auditorium is packed to overflowing, and there’s an air of excitement.

The book has found new meaning of late with the ascension of Donald Trump to the United States Presidency and all of his posturing about fake news and attempts to shut down institutions that independently manage the national interest, to better serve his own. But it is nothing on the levels reached in Orwell’s 1984.

The device for the translation of Orwell’s novel to the stage is very clever. Adaptors Robert Icke and Duncan Macmillan have read beyond the novel and taken deeper meaning from the contents found in Orwell’s appendix, where he outlines the principles of Newspeak. Working under the assumption that this information could only have been completed in or around the year 2050 when Newspeak was predicted for completion, they have subsequently cast the vantage point of Winston and his experiences into the past.

As such, Icke and Macmillan’s protagonist experiences, and enacts, Smith’s story from 100 years hence. The performance opens with a group of would-be ‘tourists’ exploring the history of Orwell’s central character, Winston Smith, through the writings apparently discovered in his diary.

The transformation from present day – which is later revealed to be a future present day somewhere around the year 2084 – to 1984 is confusing and feels a little clunky. It is only after the penultimate revelation of the story’s place in time that we finally understand the external workings of the writing, and its genius is revealed. Purists, however, may wonder how it is possible that the diary escaped the memory hole to survive in the future.

The performers all rise to their roles, and the overall effect created by lighting, sound and pace successfully generates a sensory overload that is unnerving. One feels, however, that this adaptation fails to give its key characters the depth of connection necessary to fully play out the interdependency and simultaneous isolation they suffer.

Tom Conroy is Winston and instantly feels too young for the part. Orwell describes Winston as 39 years of age, and Julia as 10 to 15 years his junior, yet the two appear to be of similar age. Early constructions of Oceania don’t sufficiently generate the details of the society that controls its citizen’s every move, thought and action, leaving Conroy at an immediate disadvantage.

Despite this inconsistency, Conroy delivers a suitably troubled Winston. Later in the piece, live camera projection is used to expose Conroy’s tortured face, blood splattered and desperate. We are treated to a vivid performance of a man torn down by the cruel and unyielding force of the Ministry of Truth.

Ursula Mills gives a solid performance as Julia, Winston’s lover and confidant.   Mills looks the part both in age and figure, and her perfectly executed, ‘wooden’ portrayal is a textbook rendering in the beginning. However, it does not evolve sufficiently as the play progresses.

The intensity of the relationship between Julia and Winston is sadly glossed over in the adaptation, with neither she, nor the relationship between them, properly explored. This weakens the importance of Winston’s eventual betrayal at the climax of the piece, which is critical to understanding the depths of his defeat; in destroying the couple’s ability to love one another, the Party proves it can truly control all thought, and strip anyone of their humanity.

Terrance Crawford is wonderfully menacing as O’Brien. Crawford is in strong voice and has wonderful stature and presence, but weakens his authority with loose and fluid body language during the interrogation. Again the adaptation overlooks establishing O’Brien as an approachable, congenial, gentleman to whom Winston is constantly drawn. This omission sells short the intensity and respect in their relationship, and lessens the impact of both the betrayal and subsequent torture at O’Brien’s hand.

Renato Musolino takes on the character of Martin, a servant to O’Brien and supposed member of the Brotherhood. His presence throughout the show is ominous and his constant, unbroken eye contact on Winston is both unnerving and equally telling. Whilst the role doesn’t afford much scope for play, Musolino delivers a wonderfully simple, controlled, performance.

As Winston’s neighbour, Parsons, Paul Blackwell is in perfect form. Blackwell imbues Parsons with a kind of harmless naivety. Completely taken in by the party and its motives, Parsons is almost comical and Blackwell nails it. Fiona Press plays his wife, Mrs Parsons and multitude other characters, all which add their own flavour to the complex storyline. Their daughter, played on opening night by Trinity O’Shea, serves as a stark reminder of the control elicited by the Party over young and influential minds.

Guy O’Grady has a short lived part in Newspeak expert, Syme, who is categorically vaporized for knowing, and likely saying, too much. O’Grady plays him in just the kind of annoying way one might expect a character expert of any type to act – dribbling on at great pace about his speciality – and is marvellously effective.

The design by Chloe Lamford with lighting by Natasha Chivers, sound by Tom Gibbons, and video by Tom Reid is crucial to the success of this production. Sound and lighting in particular are used to great effect to make the audience feel the discomfort and uncertainty that Winston suffers. Opening night sound is uncomfortably loud, and one has to physically block their ears to lessen the deafening volume. Whilst the audio and visual discomfort is necessary in translating the feeling out into the audience, it does seem overdone.

The occasional use of voice amplification, interspersed with unamplified voice and then incredibly loud and jarring sound effects gives an uneven quality to the production which is more than just unsettling, and borders on annoying. More amplification of spoken dialogue throughout would smooth out the enormous undulations in the levels.

Video is effective in conveying alternative locations, close ups, and in ramming home textual imagery that emphasises key themes. The cast also execute impressively fast scene changes which are carried out with military precision, every object and prop echoing the dystopian existence and Winston’s ever degrading state of mind.

Coming into this show without an understanding of 1984 may prove difficult for some. The adaptation chops and splices scenes, and regularly inserts themes and ideas without introduction. Without context, this could be confusing or worse, render important ideas into insignificance.

Character relationships suffer in this heavily edited adaptation. Despite this, the integrity of the book is mostly maintained, and the story’s emotional heart is successfully conveyed even with so much detail excluded. Overall the adaptation creates an Orwellian world worthy of attention.

If you haven’t read 1984, it is worth investing the time before seeing this show. It is not a feel good story by any stretch of the imagination, but the nuances in the script are more enjoyable with Orwell’s words ringing fresh in the mind.