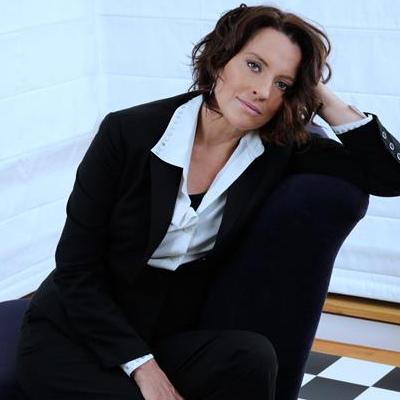 Guru Grets and her Psychic Sex and Life Advice. La Bohème. 13 May 2017

She’s very famous.  She is used to people asking for her autograph, even people who think she is someone else.  She is on TV. She has written lots of books. She is paid for her opinion.

Gretel Killeen is no shrinking violet and, perchance, we need to be told a lot of this. She is better known in the east than in Adelaide where she is holding a one-night-only stand-up comedy show at La Bohème.

The venue is packed to the rafters. Extra chairs are brought in.

But not everyone is there because of Gretel. Gretel’s sidekick is Joey Moore, one-time South Australian Channel 9 children’s TV star. Joey, who has been living in the east and working as a voice-over artist, is beloved by many and they’re there at her behest.  Joey’s job is to introduce the great Gretel and be her foil.

They’re friends and also peers in the world of voice-overs - one for Optus and t’other for Telstra. There’s a good line in that and Gretel goes for it. She also chides and mocks Joey who stands in the wings loving every moment of it.

And that’s why the house is full. Joey would not recommend us to a lousy show. Gretel Killeen, stand-up comic, is a joy.

She has a wry, self-deprecatory wit and a wise eye for the absurdities of life.

She is frank, disarmingly so.

She is not standing up. She is perched on a stool and, oddly, wearing a fur hat. She is post-operative, she reveals, and on drugs. She’s here because she did not want to let the show down. She says her memory is impaired by medication and she waves notes.

She also says she is psychic.  She tells of how she was able to discern old pakoras from fresh ones in an Indian deli. Thus equipped with uncanny insight, she is here to see into our lives and problems.  She has audience members write their problems on slips of paper before the show and she later draws them from an ice bucket and discusses them. A number of people ask her to prognosticate on Trump. Gone by November, she declares. Personal questions are given the big audience participation tease. It is meant to be funny and it is. Dud questions she tosses on the floor.

She tells tales of travel and media, of stardom and ignominy.  She admits to embarrassing situations which have the audience cringing. She describes the questionable rewards of being mother to a teenage girl. She delivers it all in an engagingly droll manner. She has a script and she also has a quick wit - even on painkillers. There is lots of laughter, lots of common threads and, oh yes, she has that beautiful voice.

Whatever people thought of her on Big Brother or in the streams of books and the media persona, this Gretel Killeen is a gem. So we thank our Joey Moore for bringing her to town and hope she comes again.