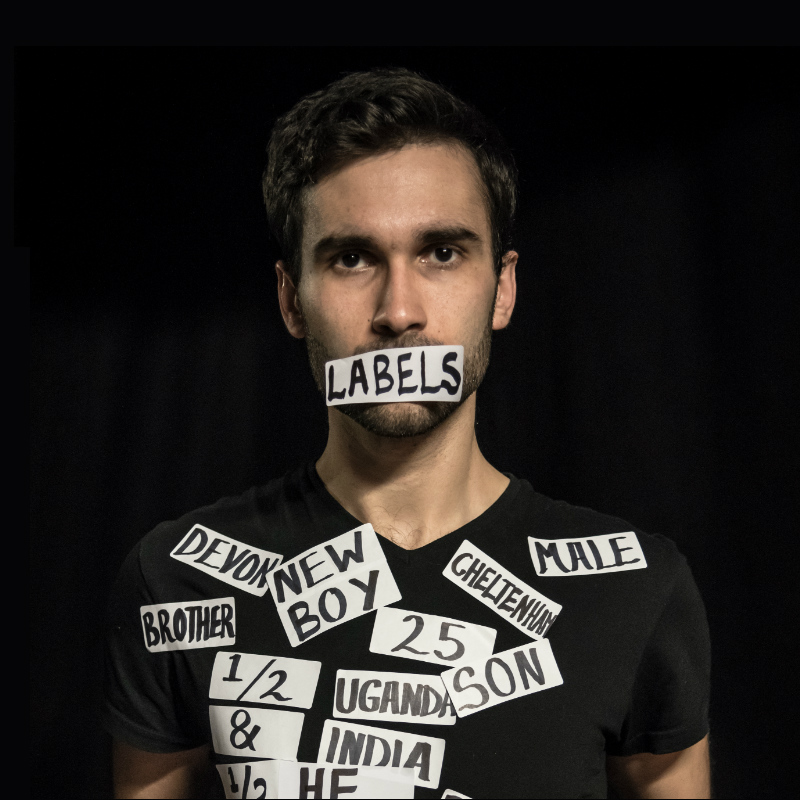 Joe Sellman-Leava is very literal about labels. He has a lot of them. He covers himself himself in big white adhesive paper labels. He gives some labels to audience members, too - 'friend' and 'enemy', for example. But the reason he is there is to make a big point about racism.

He lifts nametags of famous figures such as Idi Amin, Enoch Powell, Donald Trump, Jeremy Clarkson and even Tony Abbott. He impersonates them to repeat phrases they have uttered on the racist front. Adelaide audiences may not have heard of some of the British figures but he makes it clear that Abbott with his "send-back-the-boats" message has been classified as one of the world's headliner racists.

Sellman-Leava tells a family story in which he describes England's racism as ubiquitous. It has plagued and scarred his life. When asked where he is from, people don't want to know that he was born and lived in Devon but where did his family originate. They want to know about his skin colour. His mother is white and his father is Indian, he explains.

Sellman-Leava goes on to describe the pain of being called "Paki" and "Indian" and the discriminatory treatment experienced in the UK under those labels, experiences so troubling that his family changed the tell-tale racial label of their name and Patel became Sellman-Leava.

This UK production, written by Sellman-Leava and directed by Katarina Reinthaller, comes to Adelaide as winner of the Holden Street Edinburgh fringe Award in 2015. It has been festooned in five-star reviews from the Edinburgh festival.

It goes straight to the heart of the mighty refugee debate with Sellman-Leava using his own experiences as the strike-home bottom line.  When the argument for refugees is that they are guilty only of seeking a decent life, that they are human beings with rights to an equal life on planet earth, he presents himself as an example. He does not touch on religious discord or political baggage. It's about humanity and understanding, one vulnerable person at a time.

It is also about England, so some of Sellman-Leava's issues are new to young Australians. That England's massive influx of black immigrants goes back to Britain's territorial expansions as a colonial superpower puts a different slant on the origins of the country's mixed population. He does not mention the prejudice against the Polish workers in the UK either or the myriad other forms of discrimination which abound in this world.

The issue can go on and on.

Sellman-Leava simply uses himself and the labels we use for ourselves and others to frame his personal story, made vivid by theatrical flair.

He is unashamedly didactic and often angry.

With his suitcase of props and his plethora of stark white labels, he is a travelling showman with a modern message.

For older audience members, it is not new and having to wait while the entire front row learns to fold paper planes is a bit tedious, but the student ranks who fill Holden Street for much of its brilliant program absolutely whoop with approbation at this intelligence from a first-generation English mixed blood.

His impact is helped not only by his performance skills but also by the fact that he is an extremely handsome young man. His mission is to advance the conversation on the refugee crisis, race, and the rise of the far right, and in this he is clearly succeeding.