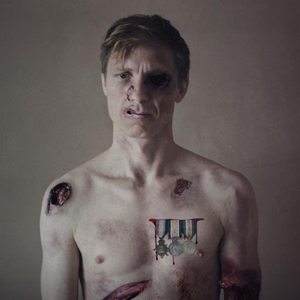 Valentijn Dhaenens's 'Bigmouth' - in which he re-created a number of history's most stirring addresses - was a hit of last year's Festival. He's back with an ultra-personal look at the consequences of some of those exhortations - the tragedies of war's aftermath.

Dhaenens grew up in the Belgian killing fields of World War I and long had a fascination with that conflict and its aftermath. The battles continue, long after the shooting stops, in the hospitals, and later, in repatriation centres. Here are men, some without limbs, who are an embarrassing reminder of the awful sacrifices asked by their leaders.

Dhaenens has collated the stories of soldiers, nurses, orderlies and doctors from throughout the ages, but with an emphasis on The Great War, and conjoins them in this gentle, sympathetic and humanistic production. Dhaenens began as a hospital orderly, weary and world-wise from seeing a parade of carnage that ends in body bags, eternal care, or a forgotten fading away.   She tends to an image of the actor as an amputee who dreams of being whole again by cloning into multiple ghostly images. These other survivors are a damaged lot representing a sad array of psychological and physical disability.

There have been millions of small wars like these after the big ones. It's going on today. The beauty and simplicity of the narrative belies the technical virtuosity in the seamless interaction of the digital imagery with Dhaenens's orderly, and in the conjoining of the original testimonies. The result is an incredibly moving and intimate production. Bravo!