Anna Robi and the House of Dogs 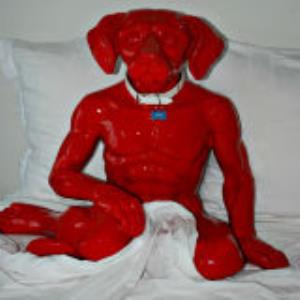 There's nothing upmarket about the name Gobsmacked for a theatre company, so keep expectations low for its Fringe production of ‘Anna Robi and the House of Dogs’.

This play, written by Queenslander Maxine Mellor, is vulgar, gross, over-the-top and somewhere way out there.

She is a very annoying young woman hell-bent on losing her virginity.

The problem is that she shares a bed with her sick and nasty old mother and the rest of the house is a sea of squalor dominated by faeces and fecund dogs. Housekeeping consists of adding layers of newspaper to cover the last layer of newspaper.

Hence there is a wonderful set designed by director David McVicar. It is dominated by a double bed with ugh-beige sheets. The floor, of course, is a mass of newspapers which have their own aesthetic. Fake dog turds lie here and there.  The backdrop is a wall of cardboard cartons labelled "Catalog".  The horrid old mother is addicted to catalogues and home shopping.

That vile old bitch is played by Emily Branford who milks the laughs by taking the character as far as she can. She uglies up and does a lot of grimacing - almost to the gurning point. She is loud and mean and generally repulsive. She is a nightmare version of the bedridden grandparents of ‘Charlie and the Chocolate Factory’.

Then comes the dream sequence and Branford transforms to a 50s Home Beautiful mother complete with birthday cake. There's music and mime, and a bit of a dance. It breaks the ugliness and shows another side of Branford's comic spirit.

But all too soon, it's back to bed and torrents of sexual fury - much talk of lipstick penises and stinking vaginas.

If one is supposed to have any sympathy for the frustrated daughter, played to gawping and gawking excess by Hannah Nicholson, it fails. She comes across as shudderingly deranged.

There is humour, however - quite a few titters and one or two laughs. It is, after all, so absurdly crass. One might call it a "grotesquerie".

If you are into the possibly humorous depths of pissing in the bed, dog-mating and squalor, this is your show.