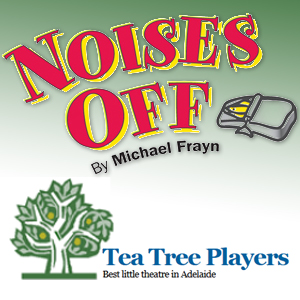 I have lived in Adelaide - on and off - since 1982, and have been reviewing theatre for thirteen years, but I have not packed a snack and made the trip all the way up to the eucalyptus forests of Surrey Downs to see theatre, until the opening night of ‘Noises Off’.  What I found was a beautifully restored old institution building made of slate lovingly converted into a quaint theatre with newly upholstered seats and freshly painted walls.  I was the youngest of all the audience and I could sense the huge support for, and pride in, this theatre.  And this same dedication was evident in the Tea Tree Players' successful production of ‘Noises Off’ - perhaps the most technically difficult comedy known to man.

English playwright Michael Frayn got the idea for ‘Noises Off’ while watching one of his earlier plays from the wings, and thinking, "By Jove, this is funnier from behind than in front!"  In the first act, it's 1 am, and we see Otstar Productions in their final dress rehearsal of the first act of ‘Nothing On’, and not ready at all for the opening.  Frayn populates the stage with eccentric theatre types in growing levels of dysfunctional relationships.  In the second act of ‘Noises Off’, the first act of ‘Nothing On’ is hilariously reprised but viewed from back stage - a month into the tour and things are more tetchy.  The third act - the slightly unnecessary third act - is again the first act viewed from the stalls, but ten weeks later when we see how the disintegrating relationships spill onto the stage - Frayn seems to know every actor's nightmare of things going wrong.

The challenge of the play is the split-second timing required in ever more frenetic farcical door-slamming, prop mishandling, and slapstick comedy, with actors dovetailing their stage character and their stage character's character.  Director Robert Andrews has his cast operating with the precision of a military tattoo earning much laughter and continuous amusement and amazement.  The crispness required in performance to make it look haphazard and breezy is not to be underestimated.  Bravo!

The cast do a fantastic job.  Damon Hill in a relatively minor role shows how to underplay for comic effect.  Amber Platten, looking pretty comfortable in Victoria Secret, was also suitably deadpan.  Adrian Heness was precious.  The opening night audience witnessed some over-exaggeration amongst the others, and thank God that's over.

You couldn't pull this off without Don Stuart's super-functional set, nicely decorated by Damon Hill, that somehow got turned around in each interval.  The set itself adds to the farce as Stuart squeezed all those doors next to each other and shortened the staircase to the second floor to about one metre to fit the confines of the stage.

Frayn even provides a programme for ‘Nothing On’ complete with fake biographies and much more, but Theresa Dolman (Programme) mixes up the fictional and non-fictional credits, making it hard work to get the joke.  Hats off to Beth Venning (Props).  Bravo!

‘Noises Off’ was a great way for me to be introduced to the Tea Tree Players.  Well worth the trip.

When: 4 to 21 Feb
Where: Tea Tree Players Theatre
Bookings: teatreeplayers.com