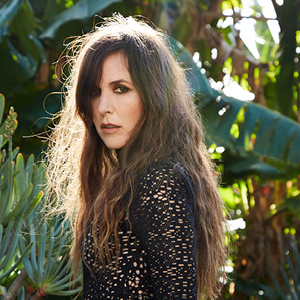 In itself, her name rings a sense of gentle beauty with firm resolve.

And, in herself, so it very much seems to be - which fills one with a deep pleasure that our dear Ian Scobie and team have done it again. They’ve picked a jewel to adorn WOMADelaide.

But Covid has been a patchy business for entertainers, Reb Fountain among them.

"I performed at WOMAD New Zealand,” she says. “It was my last gig before lockdown.”

WOMADelaide will be her first foray into Australia and she seems effervescent at the thought.

“It is pretty special and the band is excited."

Fountain has worked with her touring band of Dave Khan, Karin Canzek and Earl Robertson for two years now and, says she warmly, they feel "like family" to her.

Despite a music education in jazz, Fountain has evolved style which defies the pigeon holes of musical definition. Melodic, anthemic, sometimes ethereal.... Some cast it somewhere between "noir folk-punk" and pop. There’s an occasional zephyr of Kate Bush in there somewhere.

She undulates arms and sways, tossing a luxurious cascade of hair as she performs. She does not push out her songs. She uses the art of underplay and a subtlety which simply magnetises the attention. She is different.

“I enjoyed singing jazz and it taught me a lot but I don’t throw in any trills or frills to fill in the space in my songs. There’s no need to be flashy to communicate,” she says.

She relates to the word “nuanced".

She feels that hers is the style of the outsider, the person who does not belong.

She feels thus because, while she comes to us from New Zealand, it was from San Francsico that she came to New Zealand - aged 11 with hippie-spirited parents who had decided to migrate and then found it was more of a culture shock than perhaps they had anticipated, seeing Christchurch and the little town of Lyttleton where they had settled was not at all as progressive as San Francisco had been.  They felt like outsiders then and, says Fountain, she has never lost that feeling.

But Lyttleton had a folky tradition and her family were of that ilk, raising her on a diet of Bob Dylan, Pete Seeger and Woody Guthrie.  So it comes to pass that today she cites Joni Mitchell and Joan Armatrading as subjects of her admiration and, above them all, Marianne Faithfull.

She attributes the “migrant family” phenomenon to her urge to write her own music.

“It was a way of making sense of myself and my relationship to the world,” she says.

“Although I had, had some formal education, most of what I have learned in life has been on the road, making mistakes, working on myself. It has been more a journey of inner work than practical. I’ve been trying not to be self-centred and impossible for people to relate to.”

As an interviewee on the phone from New Zealand, she conveys modesty and an engaging personality. She expresses herself as soul still growing and exploring the new.

“I had a lot of issues when I was young and they toughened me up and freed me so I became more able. Now I feel liberated.”

But she is not unencumbered. Fountain has a strong political conscience and she applies energy to causes such as climate change, lamenting the lack of action on that front. Injustice to the people of Palestine is another.

“Everywhere there is a lack of mindfulness,” she laments.

“In a market-driven economy it is difficult to be mindful, to remind people of the importance of mindfulness.”

Perchance the messages of her sublime music will offer just such reminders to people in these troubling times.

You can get a taste of her here: YouTube