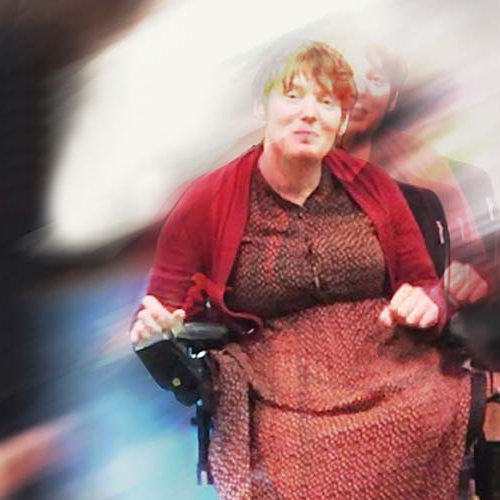 Are disabled people “unseen” by the able-bodied?

Kelly Vincent thinks so. Indeed, she believes they have lived under assorted misconceptions, some of which she describes in words reminiscent of a Victorian novel.

"Either we are sad, sick, and sorry, sitting at home staring wistfully out of a rain-streaked window, or we are these inspirational, superhero mega-humans who have to be ‘overcoming’ our disabilities by doing extreme sports or something,” she says.

“But”, she swiftly asserts, "most of us don’t fit those stereotypes.”

Just as with the able, everyone has a different story.

The rise and rise of disability arts has been delivering those stories - right into the popular mainstream.

Theatre ever was one of the world’s greatest tools of communication.

Here in Adelaide, a big nod goes to Pat Rix who earned the Lifetime Achievement Award of the Adelaide Critics Circle for her foresight and vigour in founding the famous Tutti ensemble, now directed by Gaelle Mellis.

Kelly cut her performance teeth on the No Strings Attached Theatre of Disability. It was No Strings which last year teamed with Singapore’s Diverse Abilities Dance collective to do a pioneering cross-cultural Zoom production called SAME-SAME which drove home the message of human universality. Able or disabled, people of both worlds were sharing the same experience of Covid and lockdowns.

From her beginnings with No Strings, Kelly Vincent's talents have kept rising. She has become not just an actress, playwright, and poet but also an influential activist.

She is well remembered as a Member of the Legislative Council for the Dignity Party.  She was aged just 21 in 2010 when elected, becoming the youngest member of the Parliament of South Australia and the youngest woman elected to any Australian parliament.

These days she is being hailed as creator of the True Ability Ensemble which is working with the renowned Alirio Zavarce to present this new show in the Festival Centre’s The Space. It opens on December 1.

It’s called UnSeen. It aims “to give disabled people the opportunity to tell their stories and be seen for who they really are.”

Hence, it features an all-star cast of disabled performers who are liberated to present the world from their own perspective. It’s a lively ride of true-story time delivered by the cream of professional theatre.  It is clever, funny, heart-warming, sad, and surprising.

"Since leaving Parliament it has been a joy to get back to writing and theatre,” she says. "I’ve always felt like my realest self there.”

Kelly is not only one of the creators of UnSeen, she is one of its performers.

“I appear physically in about four scenes, but there is a lot more of me in the writing,” she expounds.

"Even though the writing is based on the experiences and words of the other cast members, as disabled people we have a lot of common experiences. It’s been an adventure finding the poetry and the humour in that.”

Kelly also has been enriched by her co-performers. She cites Wren Dow, a queer, neuro-divergent writer, actor, and hip hop dancer.

"I particularly love Wren’s monologue and dance,” she says. "It’s a really powerful statement about disabled people taking agency over our own bodies."

Wren is in good company.

Among them is Kym McKenzie who has been a disability theatre stalwart and star since joining No Strings Attached in about 1999.  Restless Dance veteran Rachel High has extensive international experience and even a Best Performance nomination in the SA Screen Awards. Singer Sergei Jakube comes out of the Choir of Hard Knocks and Tutti. There’s Dion Allen, Ad'm Martin, the legendary Jamila Main, Jye Parry, Lucy Lopez Rivera, Justine van Eyssen along with a strong production team and, of course, the beloved director Alirio Zavarce at the helm alongside Kelly.

"It’s funny, when we attend meetings for True Ability together, it’s not uncommon for someone to assume Alirio is my boss,” reflects Kelly. "I guess it’s because he’s this able-bodied man with a big voice and even bigger energy. In fact, our work comes from a completely equal partnership where we encourage each other’s strengths and fill the gaps in each other’s knowledge. We have this connection where he can say 'I want you to write something like…' and make a bunch of vague gestures and I know what that means, and vice versa.”

Of course, it is not all smooth sailing. Artistic disagreements can arise.

"But we love and respect each other enough to tell each other when we’re falling short and take on that feedback. That’s important for any creative partnership and friendship. We know pretty much all of each other’s buttons and how to push them. But that’s the price you pay for the special love we have.”

Meanwhile, Kelly has other irons in the fire.

She keeps in touch with the human rights policies which are so important to her by working part-time for an LGBTIQA+ rights advocacy organisation.

And, she has just published a book, her first.

It is called Dandelion Heart and is a collection of essays and poetry on disability.

And there is another book in the wings.

As for Gravity, that State Theatre Young Guns award-winning play which in 2009 brought her talents to the attention of the arts world, it never did get produced.

"Producers, if you want a short black comedy about identity crises, love and mental health, email me,” she laughs.

Kelly Vincent and Alirio Zavarce and the True Ability Ensemble