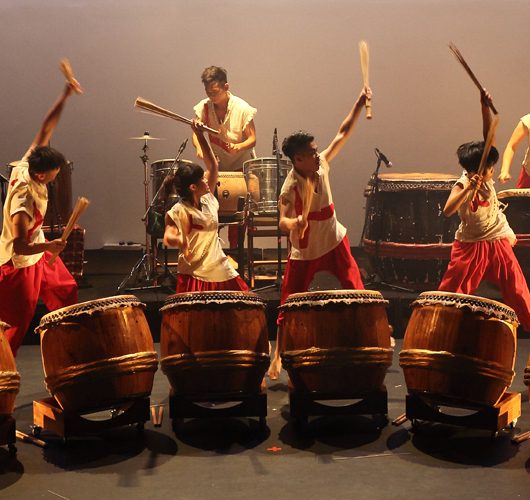 As you let the fantastical throbbing of Orang Orang’s mighty drumming ensemble thrill your core in Botanic Park, spare a thought for the quiet suffering of the drummers.

Drums are big and heavy. They are a serious burden when it comes to travel. And that means expense.

“They must reduce their luggage, only to costumes,” he says.

“That means just 7 kg personal luggage. Yes. It is hard for women. There is some negotiation for women.”

WOMADelaide has helped the Malaysian group in the logistics of getting to Adelaide for their performances in Botanic Park.

“Australia is very strict with quarantine.

“Our drum skins are made from cow and goat. Some drums are durian wood.”

For the Orang Orang Drum Theatre’s 24 Festive Drums ensemble there are eight full-time team members and twelve part-timers aged between 21 and 25.

Their drumming skills come from deep in the Malaysian Chinese heritage, linking back to the Lion Dance.

Leow explains that the name Orang Orang derives from both Chinese and Malay words meaning people and also in Chinese “ren ren ren” which means “public” or “community”.

“So it is a community for work and performance,” he says, adding that “orang” also could mean “scarecrow".

“The name makes for good interaction with people. It is a good talking point.”

So do the 24 Festive Drums with history going back to 1988 in Johor Bahru. They represent 24 festivals in the lunar calendar of the Chinese agricultural community, and that agricultural cycle is thousands of years old.

So the songs of the drums hark back to ancestors and farming styles and even to individual characters. And Orang Orang choreographers create movement to illustrate them.

They create songs to create characters, says Leow, songs which are inspired by people we might see daily, but reflecting their distinctive characteristics, unique aspects of them;

sometimes maybe an old man, a worker from the regions who is working in the city. We think of music for him.”

Orang Orang Drum Theatre’s work delves deeply into the breadth of  Malaysian culture. It is alive and evolving.

Leow mentions “lagu walk” which reflects walking to different regions. Herein the musicians can depict their origins and projects.

Thus does Orang Orang Drum Theatre spread its beat to encompass the very, very old and the emerging new. And it does so not only with music and dance theatre. Not only but also, there are different instruments and new collaborations.

Leow is excited to talk about Rosemary Joel, an exquisite singer from Sarawak and player of the very delicate-sounding stringed instrument called a sape.

“She has a very beautiful voice,” says Leow. “Last year we went to her home for cultural exchange and she was our teacher, so we now can include Sarawak folk songs.”

The Orang Orang Drum Theatre company was founded in 2013 to explore the disciplines of drum and theatre. It since has been very busy travelling the world and spreading its Malaysian cultural richness.

Now, travelling heavy with all its drums, light in personal luggage and huge in ideas and talent and cultural imperative, it has made it to WOMADelaide.

Orang Orang Drum theatre have sessions on Saturday at 1pm, Sunday at 3pm and Monday at 1pm.