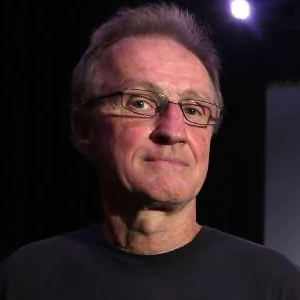 The man is indomitable. The only thing that Dave Brown may have failed at is retirement. He lasted about a minute after passing over the reins of our celebrated children’s theatre company, Patch, to the literally luminous new director, Geoff Cobham.  Brown had been some 30 years developing children’s theatre for and with Patch. His name was synonymous with the company. And so was his heart.

The wrench seemed to take him by surprise.

“When I left Patch, I couldn’t imagine a life without ‘theatre-making for children’,” he declares.

And so it came to pass that a new children’s theatre movement came into being.

Nothing was done in a hurry. This difference between Brown’s old life and this new one is deadlines. Brown has discovered the luxury of contemplative creativity, of taking time to develop projects and to create partnerships. The PaperBoats has been several years in development.

Interestingly, it is his admiration for former Playschool star, Noni Hazelhurst which underscores this new creative impetus.

"Kids are being bombarded, on a daily basis, by the popular media’s increasing focus on commercial values rather than creative ones.  Millions of dollars are poured into making junk palatable.”

"She put it beautifully when she said; “Children can be encouraged to grow, develop and participate in the world if we expose them to beauty, truth and the power of their imagination.”

Of course Brown also has a background in teaching. He studied science at university and taught chemistry before he slipped into his destined role teaching and generating theatre.

Now in the world of ThePaperBoats, the Hazelhurst ideas have become core - as has Country Arts SA which was been a key partner.

“It supports the curation of quality arts experiences for early childhood audiences,” he enthuses.

Partnerships is, indeed, the new keyword.

"In so doing, I wanted partnering artists to be open to sharing their work in a “creative commons” way…. which does not happen much in theatre and I was inspired to some extent by the online arts production model created by the hit record folk. Check out their page here.

It’s extraordinarily complex insofar as so many organisations and individuals have been involved in the creative process.”

Around 80 artistes, Brown estimates. All providing different facets if the process - and there are more co-shows in the pipeline.

It’s a triumph of a Community Sharing Agreement which, says Brown, continues to evolve.

Brown cites Especially on Birthdays as the best example of the co-creative development process.

He explains: "We made the work in Australia alongside the creation of Gimme Please in the US and shared our animating idea, design palette, our processes and content across each other’s creative developments which deeply influenced each other’s outcomes - and yet the two works ended up very differently.

"The first through-composed music score for Especially on Birthdays was written by the Zephyr Quartet and voiceROM.  Then two Singaporean performers came to Australia to learn the physical score of the work (a non-verbal visual theatre work) and presented alternating performances as part of our Commonwealth Games season. They then returned to Singapore and remounted the work - with a new Singaporean music score by Stan&Soap and a re-interpreted design, for Singaporean audiences.

"Then Matthew Wilder (composer of Disney’s Mulan, singer/songwriter of 80s mega-hit Break My Stride, and brother to Jim Weiner) wrote a new US music score for Especially on Birthdays which was presented at our season of the show in Atlanta alongside the US production of Gimme Please.”

Plans for Especially on Birthdays to do a major tour of China have now been well and truly scuttled thanks to the Cornoavirus pandemic. Similarly, The Space season of When the Mirror Bird Sings scheduled for April is in limbo as the world waits for life to return to normal.

Brown,of course, will not have the grass growing under his feet since taking time over projects has been his retirement luxury.

Not that he has wasted a minute.

He spent 2019 learning how to program lights and then proceeded to design the lighting for the new work,

“That’s something I’ve been wanting to do for years but never had the time,” he says.

Massive amounts of work were dedicated to the new creation, devising a narrative thread which would ensure that children would be engaged, developing a new colour palette with designer Meg Wilson, rehearsing and honing. Thousands of hours, Brown estimates.

“And, I can say that there was never a dull or difficult moment,” he says.

When the Mirror Bird Sings features music based on Vivaldi’s Four Seasons and is described as a spirited modern fairy-tale. It is about wondrous birds with mirror-ball eggs and, thematically, it is the age-old struggle between good and evil.

"Responses to the show have been quite emotional especially from adults”, Brown enthuses.

"Kids absolutely love participating in the piece and they are hushed during the scenes of betrayal and redemption. It’s quite a dramatic and serious journey for young audiences - who are usually offered fairly light dramatics.”

When the Mirror Bird Sings targets 3 to 8 year olds and has been created to work both in high tech theatre venues and in low-tech community halls and schools.

When: Rescheduled to 12 Sep