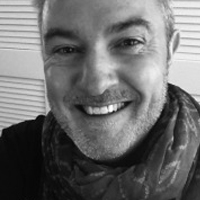 Is it bravery or chutzpah that brings a flow of astonishing solo performers to our city each year?

If there’s a medal of merit on offer to any of them, Gavin Robertson should be at the front of the receiving line.

He traipses the world with nothing more than an olde world dress coat, a notepad and a torrent of talent.

He’s a loner, a solo performer who lives on his ability to win admiration from complete strangers.

He achieved that with his persona of the travelling bard, Greg Byron. #StandupPoet

Now he returns bringing that funny show of clever rhymes and perspicacious thoughts to the cool tunnels of the Treasury for just nine special shows.

This season is limited because multi-functioning Robertson is also segueing into the character of James Bond. Quite the extreme contrast.

He is inhabiting the Bond skin at the Bakehouse Theatre in a show called Bond - An Unauthorised Parody.

He’s cunningly pipping the release of the new Bond movie. Putting it into the shade, perhaps?

“There was a time before the Daniel Craig reboot where movies themselves were almost a parody,” he explains. “That’s where I’m coming from.”

He’s had this show on the road for a while, so it is well run-in for Adelaide.

Robertson says he was much amused to discover that the Bond film, No Time to Die, “basically has Bond coming out of retirement, which is the same premise as my narrative.”

“Mine more to do with my age and fitness level!

“I’ve been creating physical theatre for thirty years or so, but I thought I should acknowledge I’m no Daniel Craig! Having said that, I play a pretty sexy Bond girl.”

The most curious thing about the Robertson Bond creation is that it is not based on hard research, but quite the opposite, if one is to believe the actor.

“I ignored the books,” he asserts.

“People assume I spent hours watching the movies but actually I didn’t watch any. I wanted the clichés to be what we all know, not a nerd-fest of trivial!"

He extrapolates: “The common ground for fertile spoofs is films that we all have in common. They’re pretty formulaic really and don’t forget, before the Daniel Craig reboot (when they really went up a notch) they were almost parodies of themselves; Pierce Brosnan in an invisible car given to him by John Cleese?

“I hope they’re embarrassed in retrospect? And Roger Moore got the worst scripts.”

Robertson takes Bond anything but seriously. He can be a bit scathing.

“I think he’s irrelevant, to be honest,” he declares.

“He’s always been an arm of the British Empire mentality.

“Frankly, I’m appalled at the rise of the political Right, seemingly globally - even in Australia - and that nationalistic tunnel vision is a step backwards for inclusivity and tolerance, neither of which Bond is renowned for.

“I think at best he’s a good action movie catalyst. The show is pure escapist stupidity.”

Bond will have twelve performances at the Bakehouse, a venue Robertson has chosen to give himself a less pop-up and more traditional theatre environment. Greg Byron, however, will be lurking in tunnels.

Gavin Robertson comes to the Adelaide Fringe as a super one-man entrepreneur, not only with two solo shows in two high profile comic guises but also as his own booking agent, publicist, writer, director, producer, costumier, et al.

Interestingly, Robertson has one more string to this busy bow. He is a creative partner to the Moscow English Theatre, an outfit he explains is intended to produce shows in English for Russian audiences.

So, as well as travelling the globe as the five-star funnyman standup poet and the sexy action fantasy superstar Bond, he travels to Russia where with the Mayakovsky Theatre, close to Red Square, he is a stalwart of Chekov classics.

“Bond would be horrified,” he laughs.