Interview: A View from SA’s History 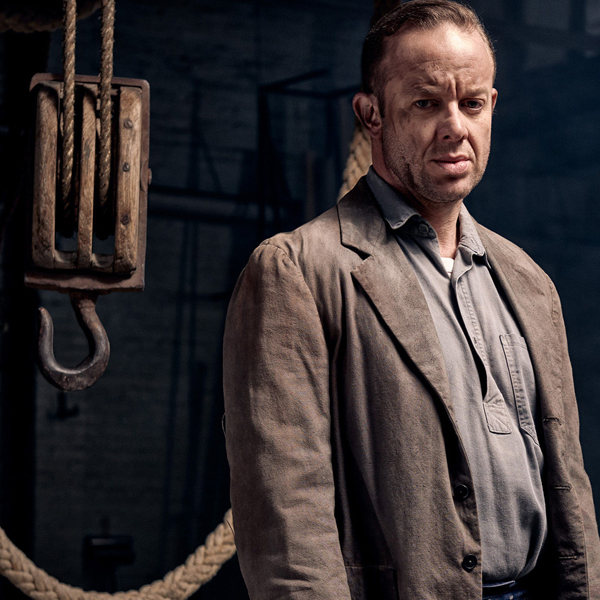 Words and reflections by Samela Harris.

So much changes and yet stays the same.  It was 1960 when Arthur Miller’s A View from the Bridge first was performed in Adelaide. It was bold and controversial, a cutting-edge piece of American theatre which dared to confront the ideas of incest, homosexuality, and illegal immigration.

Not only but also, it was staged in the round under the direction of Colin Ballantyne whose Adelaide Theatre Group gave birth to the State Theatre Company and professional theatre in South Australia.

Almost 60 years later, that very company reprises the play and demonstrates that its themes of family, class, and immigration may no longer be cutting the cultural edge but they remain fresh and relevant, and that A View From the Bridge is a superbly-written piece of theatre, a contemporary classic.

It was in this context that former STC artistic director, Geordie Brookman, programmed the play, leaving it in the surprised hands of renowned director Kate Champion.

“It was not a play I would have picked to direct,” she says. “I have a strong commitment to new Australian works.”

Now the Sydney-based director is thriving on her immersion in a classic.

“And, it is a relief to direct something so well written,” she reflects.

A View from the Bridge was written and is set in the mid-1950s. It depicts an Italian-American family living in Red Hook, a downscale suburb in the shadow of the Brooklyn Bridge. Eddie Carbone, a longshoreman on the docks, has become fixated on Catherine, his wife Beatrice’s almost 18-year-old orphaned niece who lives with them, so much so that marital relations have almost atrophied. Hence, when Beatrice's cousins, Marco and Rodolpho, come to stay, illegally, in the US in the hope of finding a better life, tensions churn up in their confined family living quarters. It seems that the glamorous young Rodolpho has set his sights on Catherine. Eddie fears he is looking for easy citizenship. As the dominant male, he seeks to defend his territory.

The story seems straightforward and, indeed, it is. It concerns jealousy and suspicion, love and loyalty, rivalry and betrayal, innocence and spite, hope, and the risks people are taking when they flee their country and become illegal immigrants, among other very human strengths and frailties.

Thus does it endure.

The play has had a colourful history. Right here in Adelaide, it was something of a sensation, performed in the long lost Willard Hall in Wakefield Street. Colin Ballantyne was king of quality in Adelaide’s prolific and excellent theatre of that period and many distinguished Australian actors emerged from his stable.  In this production it was Les Dayman, who went on to become a major national stage and television identity.  This performance was to imprint his talent upon the audiences forever. Also in the production were noted Adelaide actors Frank Foster Brown, Neil Lovett, Tina O’Brien, Don Gooding, Bruce Koehne, Judith Symon, Bill Pitman, Dennis Scrutton, Don Tilmouth, Jacques Tarento, and Bernard Walsh.

It was Adelaide’s first-ever production in the round and the theatre world rippled with excitement at how brave and innovative this was.

It worked triumphantly and plays performed in the round became quite fashionable. The Space theatre was built with performances in the round very much front of mind.

This now celebrated piece of American theatre was reprised in Adelaide again in 1993 at The Arts Theatre under the direction of Warwick Cooper.  It featured Adelaide actors including Michael Baldwin, David Grybowski, Julie Quick, and Elizabeth Siebert.

Dayman is now well and truly retired and for this new incarnation of A View from the Bridge Champion has cast Bill Allert, Brett  Archer, Mark Saturno, Elena Carapetis, Dale March, Malah Stewardson and Antoine Jelk, giving the celebrated Victoria Lamb responsibility for the set.

Where Ballantyne’s boxing ring set featured ropes as thematic, Lamb also has incorporated ropes and boxes. This is not because of the pivotal boxing scene in the play but, she says, to reflect the work of the Brooklyn longshoremen “and a sense of the claustrophobia of the people in the tenements living on top of each other.”

Also, there’s a suggestion that we’re all hanging on, one way or another. "Nothing in life is solid.”

Champion says they are symbolic of the tenuousness and tensions of the play, just as the bridge in the title reflects not only the setting but acts as a metaphor for the bridging of cultures portrayed in the work.

One of the members of the historic 1960 Adelaide cast was Neil Lovett, now retired and living in Queensland. He played the role of the lawyer who also is chorus to the play. He recalls vividly much of the intensity of creating the production with Ballantyne and being coached by fellow cast member Frank Foster Brown in the American accent. Indeed, he says the cast was so focused on preparing the work that it was oblivious to any controversy surrounding it.

“I enjoyed working with Colin Ballantyne,” he says. “He was very histrionic in his form of direction, and it worked.”

The production engendered very positive reviews.  “I recall one by Anthony Rendell in Mary’s Own Paper (the precursor to The Adelaide Review). It was positive but a bit arch at times. Young people tended to be a bit arch.”  Rendell went on to be a renowned innovator in Australian and British current affairs media.  He died in 2016.

Lovett also enjoyed working with Les Dayman, now in poor health, and their friendship endures to this day.

Dayman’s performance in that historic boxing ring in-the-round set was incredibly potent and it made quite clear that Les Dayman was an actor for whom great things lay ahead.  I say this with the authority of one who was there and on whom that courageous production made an indelible impact.

State Theatre Company’s A View From a Bridge plays from the 12th of July to the 3rd of August at the Dunstan Playhouse.