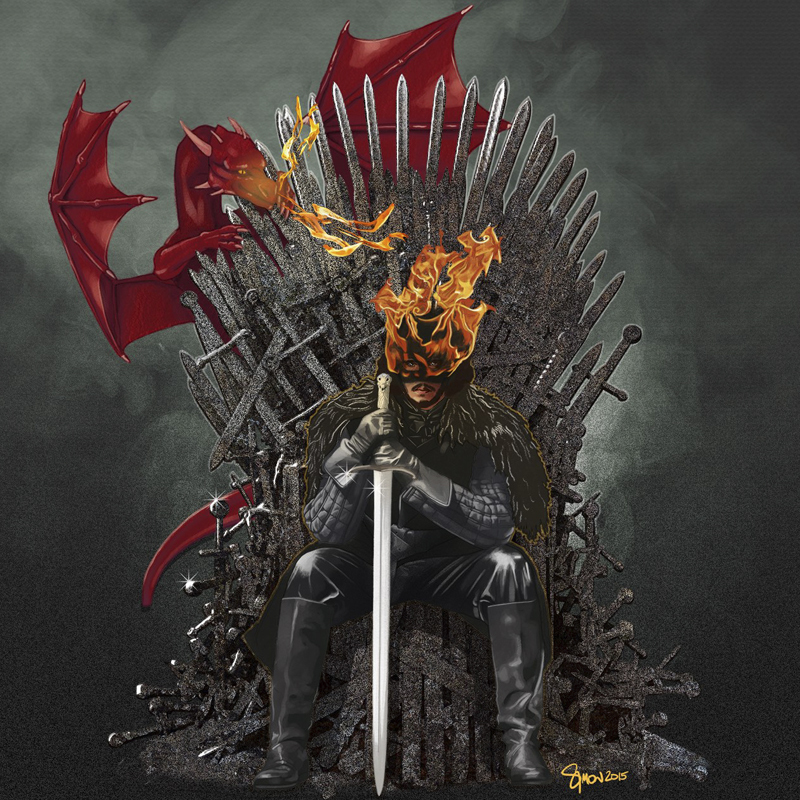 Now in its fifth year, and returning to the Adelaide Fringe for a second season, Thrones! The Musical Parody is about to transport audiences once again to that world of ice and fire through musical parody and satire.

Albert Samuels is both writer and performer in the show. “We were asked a few years back to write a musical comedy of 50 Shades Of Grey,” he recalls.

It was after the success and fun of that process that the team decided to explore Game Of Thrones (GoT) for new material.

“It’s a challenge,” Samuels laughs. “Most stories have a central protagonist. Lord of the Rings is a great example. It follows Frodo and Samwise, and everything else is built around that. Game of Thrones is not so easy however. It is intentionally written from the point of view of a million different protagonists!”

To wrap the entire GoT story into 75 minutes, Samuels and his team have focussed on just a few central characters including John Snow, Tyrion Lannister, and Daenerys Targaryen.

Principally though the show isn’t centred around GoT characters at all; it is primarily about a non-GoT character called Linda, who exists outside of the world, and who has never seen an episode.

“The conceit of the show is that six friends gather to watch Game of Thrones,” Samuels explains. “Linda reveals that she has never seen the show before, and after her friends [recover from being] completely aghast they decide they are going to act out the whole show for her.”

This external context gives the writers a clever device to explore GoT from the viewer’s perspective. It gives the audience an opportunity to “call out the ridiculousness and the violence.”

“We built the show so that even if someone has never seen Game Of Thrones before they will still enjoy it,” Samuels explains. “We wanted to make a good musical that has good songs in it and that has a good story. So that’s why we have the framing device of Linda, who’s going through a really rough time in her life – her husband has just left her. When her friends gather to celebrate, ostensibly they’re celebrating her divorce, but really they want to come over to her place because she has the nicest TV of all of them.”

Once Linda confesses her GoT ‘virginity’ her friends decide that in the hour before the premiere is to air, they will act out the show and bring her up date.

The show does contain coarse language and simulated nudity, so it might be an eye-opener for youngsters. The company welcomes parental guidance, however, for anyone 14 years or older.
“If you would let them watch Game Of Thrones, you will be fine, but if you wouldn’t – you shouldn’t come,” says Samuels.

The cast and team of writers hail from all over the US including, Chicago, Los Angeles and New York and come from different comedy backgrounds including script and screenplay writing for film and TV, as well as for the stage. Samuels explains that the process for creating these musical parodies is one of huge collaboration. There are five writers, two of which are composers, and a head-writer who is in charge of the direction of the show. The lead writer will suggest a scene or song that is needed to progress the story, but all ideas are supported and encouraged.

“Luckily we are all such Game Of Thrones fans that we all came with a lot of ideas,” Samuels says.

A lot of the work done ends up on the cutting room floor, too.

The team might love a song or love an idea, but if it just doesn’t fit, it won’t make it into the show. The collaborative excess is never wasted, however, as Thrones! is continually updated. This latest tour has new content from the TV series’ seventh season.

Part of the success of the show, which is now in its fourth year of touring to sell out houses, is put down to not “coasting” when it comes to the comedic content.

“One of the things we learned from doing 50 Shades is to respect your audiences' intelligence,” Samuels explains.

“We [aim] to give them something that is creative - whether you love Game Of Thrones, whether you hate it, or if you’ve never seen it - and it’ll be a much longer living show”.

As quoted in the review by Three Weeks, Samuels agrees, it is “so much better than it ever had to be” because they didn’t just go for the low hanging fruit.

With the final season of Game Of Thrones slated for April this year, Samuels believes Thrones! has as an exciting future, and likely another good couple of years of performances ahead of it. “There is at least one, and maybe multiple, spin-off shows of Game of Thrones now, and perhaps a prequel to it, so we will see where we go with that,” Samuels says. “There’s [also] Harry Potter of course,” he quips, “but we also just love original material.”

Samuels’ team do another show called Baby Wants Candy, which is a very popular completely improvised musical that Australian audiences really love. Every night new ideas for shows are called out by audience members and the show is made up on the spot.

“We have over 3,500 possible titles for original shows from that alone” Samuels explains.

More information and a sample of the music of Thrones! can be found on the show’s website, here.

When: 24 Feb to 17 Mar
Where: The Flamingo at Gluttony