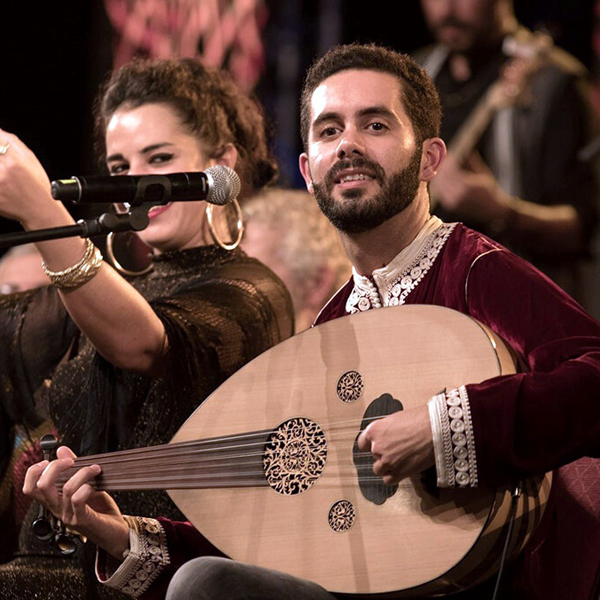 Last time Yohai Cohen was at WOMADelaide, he was just one voice in Ensemble Piyut, a large male Jewish litugical choral ensemble.

Just two years later, he returns to WOMADelaide as a featured musician with his own already renowned band.

His rise in the music world has been remarkable.

At only 28 years of age, Cohen reveals that he also has moved from student to teacher.

Cohen is talking from his home in Beit Zait, Israel. Here he is teaching music, particularly the oud, an instrument of which he is now an acknowledged master. But, ironically, his expertise was honed in Australia. He was in Australia for two years studying music and in that time he learned the oud from a Syrian teacher, Adnan Barak.

At Monash he learned the usual things such as classical music theory, jazz theory and, he says, "what people call world music”. He took issue with the label of “world music”, preferring to see it as multicultural.

Therein, like a glove, fits his treasured Andalusian music. This is a sound he will make sure that Adelaide hears.

But for Yohai Cohen it did not begin with the oud. Cohen started out as a percussionist.

“Then I found out I was hiding behind the instrument," he says.

Since he also is a singer, and much admired, it suited that he play an instrument that liberated him to sing.

The oud was already a great love.

He admits that it was hard to learn and it also is hard to teach.

“I just love the sound of it,” he enthuses.

"It is a very rhythmical musical instrument. It includes percussion in the music.”

Yohai Cohen was born to Moroccan parents in the northern part of Israel. Hence, his music is strongly of Moroccan Jewish derivation.

Swiftly, as he mastered the oud, he gathered fellow musicians with whom to express this music, to delve into the traditional music of both Morocco and Israel and especially Moroccan Andalusian music.

“Traditional music is a very rich resource. There is a lot of it. It is never ending.”

He formed his Yohai Cohen Quintet in June 2017 in Australia and went on a Melbourne and Sydney tour. The concerts were sell-outs. Yohai Cohen was an instant hit. And he goes from strength to strength.

He has performed with the likes of the Temen Blues, Eta Sela, Idan Raichel, and Rabbi Haim Louk (New Jerusalem).

He has been performing at music festivals, most particularly in Morocco with one of the great masters of Andalusian music, Elad Levi.

"He is a huge inspiration for a lot of people,” declares Cohen.

“He is my dear friend and he has arranged a lot of our music. Furthermore, he is coming to Adelaide to play with us. He is our special guest. He has never played with us before. But this is very important to us.”

Elad Levi is a violinist as well as an arranger. He is a lifelong student of Moroccan tradition and a leading disciple of a famous Andalusian violinist, the late Yeshua Azulay. He has his own Andalusian music group and he tours extensively.

Cohen sees Levi as adding to the string of great masters who have played WOMADelaides.

“That is what the people come for, the great names of the world who come and play for people who have never heard their kind of thing before, getting them on their feet and dancing.”

Yohai Cohen’s Quintet is known for getting audiences energised with foot-stomping celebratory music as well as gentle, melodic music, spiritual music, and hymns. There also is jazz, funk, and improvisation in their range.

Now living back home in Israel with his parents and sister, he craves to balance the touring musician’s life with home time. This, he says, is valuable for practising as well as teaching.

But, in the end of the day, his hopes are just to be happy, to have a family, to play the music he loves, and make people happy with his music and, ideally, to say something through his music, “something that is my style and to make the experience spiritual”.

He hopes to communicate these feelings to his audience at WOMADelaide, a festival he describes as “very relaxing, just like Australia, and also cheerful, cool and very professional.”

So say all of us.

Yohai Cohen Quintet will play at the Moreton Bay Stage