Interview: The Club that Leong Built 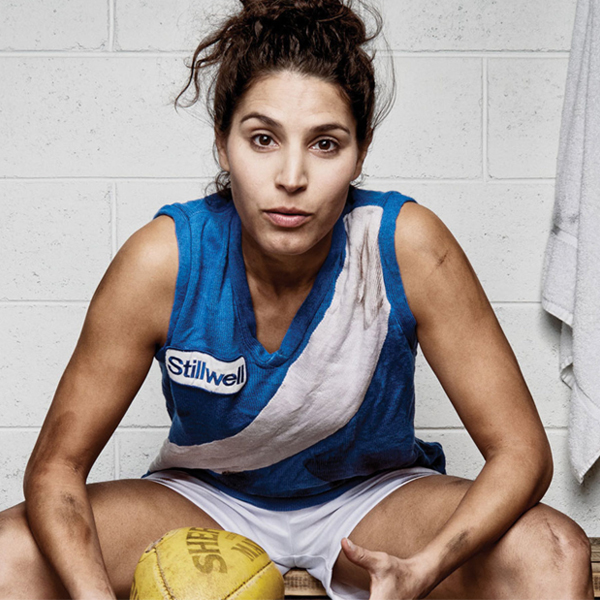 The winds of change have blown a gale on the world of Aussie Rules football.

Not only do we now have female football commentators and a fully-fledged all-woman pro-league football team but now we also have a female interpretation of the classic Australian footy play, The Club.

If eyebrows are up around the town about moustachioed women performing this renowned piece of macho tradition, its creator, playwright David Williamson, is just fine with it. He knows the time is right. He knows the zeitgeist when he sees it.

Director Tessa Leong of the isthisyours? independent theatre company had the idea of a sex change for The Club about two years ago.

“It’s hard to know where ideas come from. They build up sub-consciously,” she says.

She distilled it for a while and then sounded out on a few theatre people in Sydney.

“The first two said it was a great idea but David Williamson would never agree with it,” she reports.

Tessa says her proposal to the playwright outlined "the way in which we are in a stage of world evolution in which we are questioning the power structures that make society tick, our safety and things not keeping people safe, and the abuses of power…

"We are having a discussion around women and the re-interrogation of women’s place in society in a way that has not been seen since the 1970s.

The Club is a satirical expose on corporate presence in sport. It is a discussion on how to breathe new life into a football club in crisis. It is one of the most performed plays in the country.

“There is something happening now akin to what was happening in the 70s, the discussions of who holds the power and who lays down the law and who keeps everything standing.”

Interestingly, in articulating these thoughts to the playwright, the director of the brave little female theatre company found she was further convincing herself that she had the right idea.

Her thoughts had emerged almost osmotically from her own Aussie roots, from the SANFL games of her childhood, growing up with a footy-mad mum and then navigating her way through allegiances to the AFL when she moved to Sydney.

"Sporting life has changed. And with it we have watched the rise of the corporate AFL. What was once a community activity has become a corporate structure. This is what David Williamson was distilling in The Club."

“When I wrote The Club around 40 years ago, about the all-male, testosterone-driven political infighting behind the scenes in an AFL club, I never thought I’d see an all-female production of the play,” he responded.

“But as my aim was to satirise males behaving badly, who better to make the satire even sharper than a very talented team of female actors/comedians?” says Leong.

“We had to explain to him that we are a company of only so many people with only three actors able to perform the play at this point.

This forced and encouraged us to think outside the square with the play’s characters since the women would be playing multiple roles.”

Knowing that their target production would be with State Theatre in Adelaide, isthisyours? performed a small try-out season of the concept at Belvoir Street, what Leong calls a “conceptual version of the show’s bare bones”.  It was a success.

It enabled the company and cast to test the waters with an audience which does not have AFL as its first local loyalty. Sydney is a rugby city, but the corporate nature of today’s sport and the influences of social media on stardom emerge as common threads.

“It was wonderful opportunity we were afforded that generosity by Belvoir,” says Leong.

And so it comes to pass that we now have not only a famously male-oriented play performed by women but also as an historical milestone for the State Theatre Company of SA.

“We discover that we are the first all-female cast and administration team in State Theatre’s history,” declares Leong.

Indeed, with Tessa Leong as director, the company brags Renate Henschke as designer, Susan Grey-Gardner as lighting designer, Catherine Oates as composer and sound designer and actors Nadia Rossi, Louisa Mignone and Ellen Steele as the cast, along with lots of fake moustaches.