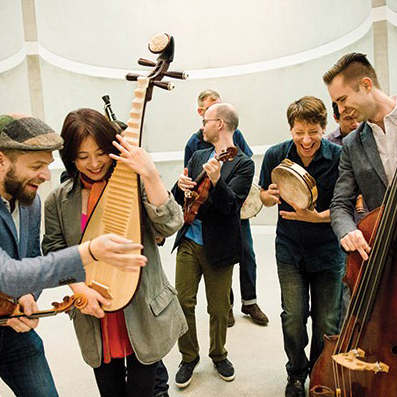 Deciding on what ingredients should constitute a concert performance is not unlike arranging a fine dinner menu.

A delicious selection of slow, fast, medium, and tango music has been carefully picked and mixed for the Ensemble’s WOMADelaide performances in Botanic Park.

Gotoh, a fashionable foodie with a bent for good gourmet TV shows, likens it to Netflix’s Chef’s Table wherein chefs source foods of the land in mysterious worlds such as the Amazon and use their skills and instincts to concoct new culinary marvels.

Silkroad is not like any other musical phenomenon of our time.

It was the creation of the superstar cellist, Yo-Yo Ma, and its spirit follows musically the idea of that ancient Silk Road, the Eurasian trade route which fearlessly connected countries and continents in the name of silk, spices, and international economic relations.

For Yo-Yo Ma it was bringing together ideas, education, artistes, and musical and cultural traditions. It began in 1998 and two decades later its path has wound around the globe; its sounds and ideas being aired from schools to the greatest stages of the world. It is linked to Harvard University and the Rhode Island School of Design. It has recorded 7 CDs, won a top Grammy, published a book, featured in a major documentary, and commissioned countless new works.

Its musical membership now numbers more than 60 musicians, arrangers and composers and behind them a vast team of production specialists, managers, and designers, as well as a substantial board.

The instruments played include the pipa, sanxian, merhu, sheng, shakuhachi, oud, mugham, kamancheh, janggo, ney and even the piano and double bass as well as violins, viola, cello and clarinet.  And, not forgetting the voice.

Brooklyn-based Mario Gotoh is among nine performers coming to Australia and New Zealand on tour. She has been a part of this great cross-cultural musical empire for six years.  She also tours and performs with an ensemble called The Knights. She’s a Grammy Award-winning musician and composer with dual doctorates in music and a reputation for innovation. She was the original violist/violinist in the Broadway hit and soundtrack for Hamilton, the Musical.

To Adelaide she is bringing just her viola, a precious instrument she had made to her own specifications about six years ago. It is growing into her character, sound, and style as she plays it, she says.

She was just five when she fell in love with the violin. Her older sister brought one home from school where she was learning in class.

“I immediately wanted to play it,” she recalls.

“I asked for one for about a year until my parents realised how serious I was. They bought me a sixteenth size one and I began to learn at school. I only took up the viola in 2009.”

Now, aged 34 and “unmarried and free as a bird”, she gives her life to playing and touring. Australia and New Zealand are exotic new shores for her but she recently was inspired by a visit to Cuba where she encountered a very different form of human communication, one between people who don’t have cellphones and the Internet to consume their lives.

Cuban music is not yet a part of the Silkroad repertoire, but with its rich “cross-pollination” of musical ideas it probably won’t be long.

“Inclusivity,” is the word that springs to Gotoh’s mind when explaining the raison d’etre of the Silkroad Ensemble.

“Silkroad is in the spirit of Yo-Yo Ma. As artistic director and creative founder, his idea was that of expanding classical and world music in a way which made it more inclusive than just any one genre; opening it up as a global cultural celebration. Therefore we have a group of musicians from different backgrounds and traditions, cross-pollinating to create new spaces, finding ways that are familiar rather than focusing on the differences.

“That’s why our performances are not only diverse but exciting, getting an audience hungry for what is new and foreign,” she says. Indeed; an extraordinary musical menu.