Story: Byrne's 20th year at Maxim's with My Kitchen Fools 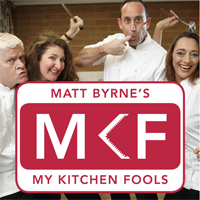 On the opening night of Matt Byrne’s My Kitchen Fools, Matt Byrne will celebrate his 20th year bringing performances to Maxim’s Wine Bar in Adelaide’s east.

“Twenty years ago I was looking for a venue for my first Fringe show and the former Odeon Theatre manager Bob Jesser suggested I get in touch with a Sam Savis who had taken over the Leon’s Wine Bar and turned it into Maxim’s Wine Bar,” Byrne says.

The upstairs venue overlooks the corner of Norwood Parade and George Street at Norwood.

“It was nice and central opposite the Norwood Town Hall upstairs, there’s a great atmosphere and we have been using four stools and the dance floor ever since. Maxim’s is a great Fringe venue, as it’s intimate, still holds 100 people, the bar is always open and the people always seem to come in and out with a smile on their face.” Byrne continues.

Byrne’s first show, way back in 1997, was John Godber’s Bouncers. The show was a sell out for four weeks.

After performing Shakers in 2000 Byrne turned his hand to writing his own shows, and has never looked back.

“The first was Barrackers, then came Virgins, Pricks, Over The Hill, Chalkies, Caddyshack And Other Dangerfields, WAGS, The Penis Principles, P.I.G.S., Bogans, dateless.com, Chunderbelly, and The Luv Boat and now we have Matt Byrne’s My Kitchen Fools" Byrne says.

The four handers have become a bit of an Adelaide Fringe institution; well known for their bawdy humour, overflow of dad jokes, and spoof titles. Byrne’s quick wit is always showcased and there is virtually no end to the puns on offer.

“The Fringe has grown massively over the past 20 years.” Byrne says “There were only a few shows when I first presented Bouncers back in 1998, now we have more than 1,300 shows. We’ve had some wonderful actors in our Fringe shows over the years and I’m delighted with the cast for our new show Matt Byrne’s My Kitchen Fools”

Half-baked TV cookery is now in the oven as Byrne’s latest show turns up the heat on the ridiculous array of Celebrity Chefs and the many TV shows they serve us up.

“But we also play the four teams who are fighting to win the right to run their own pop-up restaurant on The Parade,” Byrne continues, “We have Greek grandmother and grandson team Yia Yia and Con Moussaka, Scottish BFs Colin Justin and Justin Colin, the super bitchy Farkin Sisters Jacinta and Placinta and hippie collective Big Daddy Grassroots and his Nimbin niece Moonbeam.”

They are joined by other Celebrity Chefs, including Poo with an H, Saggy Beer, Galiano Zumba and Hester Bloominheck.

“We get to know, love and hate these people who have no cooking skills but loads of ambition,” Byrne says, “We sing and dance and give the audience an interactive taste of everything from snakes, to oysters, pheasant plucking, creamy cantaloupes and zero gravity green cheese. It’s a feast of comic ingredients but like every cooking show, it’s not about the food!”

The show will play from the 14th of February to the 19th of March at Maxim’s Wine Bar on Norwood Parade. Bookings can be made on 1300 621 255, adelaidefringe.com.au or mattbyrnemedia.com.au

When: 14 Feb to 19 Mar
Where: Maxim’s Wine Bar
Bookings: adelaidefringe.com.au