Story: All aboard the Adelaide Festival’s Riverbank Palais 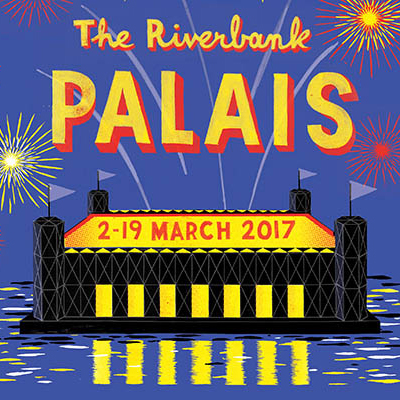 Incredible interactive art sensation House of Mirrors, US singer-songwriter Kurt Vile, US godfather of chillwave Toro Y Moi, and Aussie music legends The Bamboos are all set to rock the Adelaide Festival’s newest and most exciting venue, the Riverbank Palais and surrounding Parc Palais.

The Palais will feature more than 60 free and ticketed acts involving more than 130 artists and special guests across 18 days and nights of the Adelaide Festival, the Riverbank Palais will light up the Torrens with a full dance card of live bands, DJs, theatre shows, lunchtime forums and special events from breakfast until late night, complemented by a sumptuous selection of food, wine and roving entertainment in the surrounding Parc Palais in Elder Park.

Officially opening to the public on Thursday, March 2, the Riverbank Palais will commemorate its first night by harking back to the historic Adelaide venue that inspired it – the legendary Floating Palais de Danse of the 1920s – with a swinging concert of 1920s music by Andrew Nolte and his Orchestra.

Opening night festivities will spread onto the Adelaide Riverbank in Parc Palais, with live music from a range of local bands and DJs in the rotunda and the must-try mirror-maze House of Mirrors.

A smash hit at the 2017 Sydney Festival and Hobart’s 2016 Dark Mofo, House of Mirrors is an interactive art installation for all ages that has enthralled and amazed its Australian audiences. It has been created by Melbourne artists Christian Wagstaff and Keith Courtney from 40 tonnes of steel and 15 tonnes of mirrored glass. The walk-in maze features oblique corridors of full-length mirrors, arranged at varying angles to produce multiple reflections and kaleidoscopic-like chambers in a labyrinth of intrigue. This crazy amusement in the Parc Palais will have festival goers of all ages both lost and found - and delighted.

Delicious, affordable, theatrical and totally South Australian, Parc Palais will also offer an amazing array of food cooked by one of Adelaide’s favourite chefs, Brad Sappenbergh of Comida at Adelaide’s Central Market. Enjoy a snack, dinner before a show, supper or just hang out and enjoy the daily specials proudly showing off South Australia’s best produce, with beer and wine by SA beverage partners including Coopers and Penfolds. There’ll be Comida’s world famous Paella, a flaming fire pit with ethically sourced free range pigs and lamb on giant spits, and delicious locally sourced ingredients from whiting and chips, oysters and prawn cocktails to vegetarian delights cooked over the flames before your eyes.

Music lovers will find their home at the Palais, with a packed concert program kicking off in spectacular style with the Festival’s free opening weekend concert by music legend Neil Finn on Sunday, March 5.

You can then rock your nights away on board the Riverbank Palais seven nights a week with concerts by the raucous and rollicking Hot 8 Brass Band from New Orleans, who will get the dance floor jumping with their eclectic mix of marching band jazz, funk, RnB and hip-hop, forerunner of the “chillwave” movement US artist Toro Y Moi, and Mexican musical gunslingers Mexrrissey, putting a unique spin on Morrissey hits with their seven-piece Latin rhythms.

Theatre will also take centre stage on The Riverbank Palais program with two shows - The Duke, a funny, poignant and playful show from writer/performer Shôn Dale-Jones, with half proceeds going to Save the Children’s Child Refugee Crisis, and Who Am I?, former Castanet Club member and Sale of the Century champion Russell Cheek’s funny and heart-warming account of his attempt to scale the summit of Australian quiz shows.

With a range of exciting day time events and activities, the fun isn’t just restricted to when the sun goes down.
Begin your day on board the Riverbank Palais with Breakfast with Papers where you can enjoy quality coffee and light breakfast from CIBO Espresso and copies of The Advertiser, along with lively discussions on current affairs and Festival news with Festival artists and some of South Australia’s top journalists.

Adelaide Festival Artistic Directors Neil Armfield and Rachel Healy are thrilled to unveil the debut program for their new venue, set to be the jewel in the Festival’s crown for the next three years.

“We have such pleasure in delivering to you the heart and hub of our festival, our stately pleasure dome, the floating Riverbank Palais,” says Mr Armfield.

“Whether you're hungry or thirsty, in need of a thrill or a thought or a moment's respite, on the Palais or in the grounds of the Parc Palais that surrounds it, there's a place for you from dawn through dusk, to the small bewitching hours of the night. Come and join us. And come again. And again!” Ms Healy adds.

Adapted from a Media Release by Petra Starke