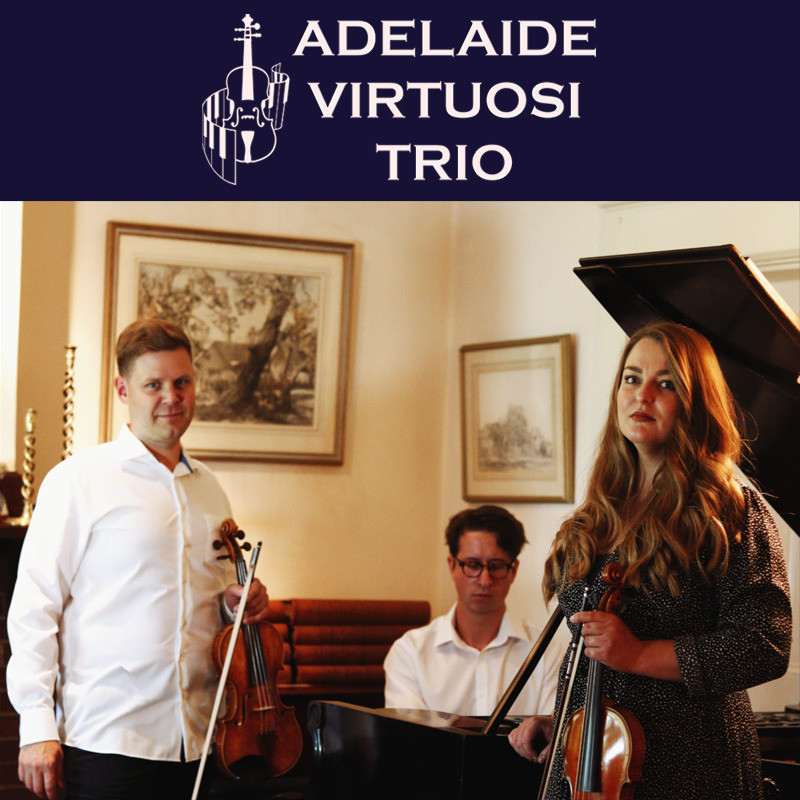 It’s a big call to name any composer as the greatest ever, let alone four of them even if the field of contenders is narrowed down to those whose surnames all begin with the letter B, but that is precisely what The Adelaide Virtuosi Trio have done in their concert The 4 Greatest Classical B’s. Of course it’s a programming and marketing ploy, but there can be no doubt that the four B’s they’ve selected – Bach, Beethoven, Brahms, and Bartok – loom large in the pantheon of greats and almost any selection of their compositions provides a solid survey of the history of western art music.

The Adelaide Virtuosi Trio comprises Adam Rybovic (piano), Marta Sutora (violin), and Matej Sutora (violin). They are accomplished professional musicians who all have their roots in Slovakia. For their well-attended concert they have chosen Bach’s Concerto for Two Violins in D Minor, BWV 1403, Beethoven’s Romance for Violin and Orchestra No. 2 in F, Op.50, Brahms’ Violin Concerto in D, Op.77 (second movement), and Bartok’s Romanian Folk Dances, Sz.68. In some ways it is a risky program: all pieces are well known to audiences, and expectations are understandably high.

To a person, the Trio’s playing is lyrical and underscored by understanding and enthusiasm, without being zealous or overly demonstrative.

The Sutora’s articulated the two violin lines in the Bach with notable clarity, with one gently retreating when it is time for the other to feature.

Rybovic and Matej Sutora performed the Romance, and easily conveyed the ample melody. Rybovic was perhaps a little too generous on the pedal in some of the unaccompanied sections.

Marta Sutora replaced Matej Sutora in the Brahms, and Rybovic played the piano reduction of the orchestral part. The pace was comfortable and dreamy, and despite the adagio marking could have been slightly more andante to ease the nakedness of the phrasing of the violin which is apparent when an orchestra is absent. When it was over, the sigh of contentment from sections of the audience was palpable.

The Bartók Dances were a highlight of the concert. The Trio found the playfulness in each dance, the innate lyricism, and downplayed the temptation to be percussive.

And there were encores, the highlight of which was a heartfelt performance of Chopin’s Ballade No.1 in G Minor, Op. 23, which he played as homage to his grandmother who recently passed away. It is one of Chopin’s most popular works and pops up in films from time to time. It evokes sorrow, majesty, contemplation, and passion. It evokes memories of loved ones.

This concert is accessible to a broad general audience and to aficionados alike.