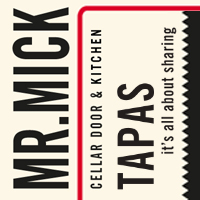 After a failed first attempt dining at Mr Mick’s Kitchen in Clare back in February, I was convinced by a Clare Valley local, Alexandra Milner-Smyth, that it was undoubtedly worth the return journey to taste some of the Tapas creations on offer at Tim Adam’s restaurant. Having previously sipped my way through the majority of the wine list at the Cellar door during my Riesling Trail expedition in February, I knew that their wines were a decent standard, which made me optimistic.

Arriving at Mr Mick’s Kitchen after the leisurely drive from Adelaide, I was greeted by the picturesque and historic Leasingham production complex which has now been converted to accommodate the restaurant and cellar door, housing the stately spirit still which sits so sparkling in the corner. Not to remove its grandeur of yesteryear, the outer retains its former glory with creepers which gently cover the facade.

Being first to arrive at 12:30pm, the staff gave me a choice of table and promptly provided the menus and offered drinks including table water. Our waitress went through the tapas concept and advised us that generally four shared plates would be a good starting point. I asked for a wine recommendation that would be a refreshing palate cleanser, and was directed towards the Pinot Gris, which was exactly what I was hoping for.

Alex and I scouted the menu and agreed to choose 2 items each. Keen to evaluate the staff’s knowledge of the menu, I decided to choose one dish and allow them to select the other. We ordered the following (in order of service):

I was interested that the fritto was the choice of the waitress, as I would generally expect a more adventurous dish - assuming the salt & pepper squid would be the standard lightly floured mollusc meat you can get on almost any menu. How wrong I was! Although the seasoned dust may have been universally consistent, the tender texture was like none I’d had before. It was almost as if it was literally melting as it touched my tongue.

With almost simultaneous transition, the duck spring rolls arrived just as we finished devouring the fritto. The spring rolls were hot and crisp with a light tanning on the outer wrapper. Using my fork to compress the contents of the casing, I was pleasantly surprised with the lack of oil you would usually associate with deep fried food. This was a sign of the oil being correctly heated to optimum temperature to ensure the filling is cooked, whilst not burning the exterior or leaving a saturation of greasy residue. The duck was flavoursome and well complimented by a slightly spicy and sweet plum sauce.

Out next came the haloumi, which would typically be quite salty and served with lemon wedges, yet when the order was placed in front of us, it was obvious that this wasn’t a traditional style serve. With a light brown pan-fried outer crust, shaved pear and golden slivers of caramelised onion the Cyprus-style cheese was a welcoming sight and smell. The slightly leathery consistency of the cheese, crispness of the pear, sweet stickiness of the onion combined with the peppery rocket created a mouthful marriage of varying flavours.

Unexpectedly our final dish was delivered by the head chef, Gus Barlow. Unbeknownst to Gus, the pork belly was my personal choice - it is dish that, when seen on a menu, is hard to divert from. As he set the plate on the table, he made comment that this dish was “him on a plate”. A big call, but with the alluring aroma and portrait ready presentation, I was hardly going to argue. The proof would be in the pudding, or more so the pork in this case.

Laid at the end of a bed of apple puree and a puddle of Adelaide Hills apple cider glaze, the pork belly was ready to be devoured. The first incision left me disappointed. Where was the shattering crackle of the rind? Once I moved beyond this, the disappointment soon turned to elation as the gelatinous texture of the pork was perfect and almost let me forgive missing out on my treasured crackling. For $16.00 a plate, I was also left expecting more, especially given it was a shared serve.

As we were once again greeted by Gus asking how the pork belly rated, I provided the above mentioned feedback which was received constructively. He asked if we would like another dish in an almost forgiving manner. We agreed and I asked for his recommendation. He quickly motioned the crab (Crisp fried soft shell baby mudcrab drizzled with a star anise & orange glaze). I was excited that he had chosen this as it can be a more risky dish if overcooked.

To keep in tradition with dining at a winery, I chose another wine from the list. The Rose looked to be the perfect accompaniment to what was to come. Almost immediately the wine and soft shell crab arrived. An instant sensation of excitement came over me as the fragrance from the orange and anise lingered providing an insight of the flavours to come. Gus had certainly resurrected himself through this dish; with an almost contradictory crisp softness and without any sludgy spongy crab it was delicious.

Faith was now restored and my smile preserved after an almost faultless lunch. The staff were extremely friendly and at our service as required without being overbearing. I am an advocate of the shared lunch scenario; it allows you to try more over a longer period providing better digestion and more insight to the restaurant’s capabilities. This is definitely a great place for a swift snack or extended eat. From what I’m told, it is also a fantastic Friday night destination for a few drinks and a nibble after the working week or the start to a weekend escape.

More commonly known for their radiant Riesling and sublime Shiraz, the Clare Valley has certainly captured my attention for creating some fantastic food and local produce. I’m hoping that this trend continues and that more city-dwellers, interstate and international visitors make the effort to journey another 45 minutes past the Barossa to be enticed by a region steeped in history and architecture mixed with exquisite wine and restaurants showcasing contemporary cuisine.