The Earl of Leicester 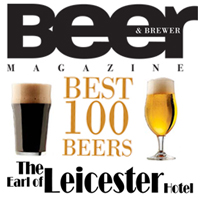 With my ears now finely tuned to Adelaide’s food & beverage grapevine I came across a prime piece of event information whilst at lunch with Paul Smith form the Prancing Pony Brewery. The Beer & Brewer Magazine were holding their annual dinner at the Earl of Leicester in Parkside. The event was to be a degustation including a large selection of drinks held at an establishment well known for their mammoth schnitzels and vast array of beers; my mouth was positively watering at the thought!

The format of the event would have any beer lover chomping at the bit. The evening started with pre-dinner drinks in the upstairs function room. It included 26 different beers and ciders predominantly from our great state of South Australia, but also some interstate and overseas contenders, from Western Australia, Germany, the UK and the US, to attempt to whisk our locally loyal tastebuds away. With an abundance of choices it was difficult to decide what to select. I didn’t make it through the entire list, but special mention must go to those tasted that I would certainly purchase in the future:

With a fierce hunger mounting, and a 5 course meal waiting, we stumbled downstairs to the restaurant and took our seats. As I browsed the evening’s menu we were greeted by Nathan Carter, of The Earl of Leicester, and David Lipman, Managing Director of Beer & Brewer Magazine. It quickly became evident that the 80 ale enthusiast’s appetites would soon be suppressed by the line-up of delectable dishes; all suitably matched with beers and ciders from participating breweries. The degustation menu read as follows:

There was no doubt the menu would keep both kitchen and waiting staff on their toes with the designer degustation.  With Pork Belly as the opening dish, my salivary glands were working overtime before the meal even arrived. Pouring the Adelaide Hills apple cider into the aptly provided champagne flute, the stage was set for a tastebud tantalising evening.

The second course, confit duck risotto, arrived shortly after the delicious Pork Belly and I uncharacteristically reached for the lighter and lesser known of the 2 brews matched with the meal. I chose Birbeck’s The Captain Australian Mild Ale (2.9%) as I needed a small break from some of the heavier beers already consumed earlier in the night. The Mild Ale was a very refreshing and complimented the slight saltiness and unusually porridge like consistency of the risotto.

The BBQ beef rib and stout mash for the 3rd course was melting and moist in its consistency. As I slowly savoured each mouthful I faced the tough decision of choosing between the craft or somewhat more commercial ale. As it happened, my decision was taken away as I got to enjoy the best of both worlds, enjoying the Cooper’s and the Vale ale before the next course was served.

Although dessert isn’t usually my most anticipated course I could hardly pass up an espresso and dark chocolate tiramisu matched with Prancing Pony Black Ale, Barossa Milk Stout and a Southwark Old Stout. Reaching straight for my favourite local hills brew, the Prancing Pony dark ale I discovered that it was a perfect accompaniment to the flavour and texture of the tiramisu. Not wanting to miss out on trying another new beverage, I also poured the Barossa Milk Stout and utilised the last scraping’s of my dessert to digest the smooth, sweet serve. It was almost tempting to pour the stout into the glass to flush the remaining traces.

By now the buzz in the room was well and truly alive and the tables, chock-a-block with a wide variety of brews that had become a blurred haze of who’s who and what was what. The final, and possibly most exciting, ales were still to be served. The closing course, a share platter of cheeses, was handed out with the three final ales being placed; these included the limited release Brooklyn Silver Anniversary Lager and the Fuller’s Bottle Conditioned 2011 Vintage Ale. The journey to these ales was a long adventure, but one well worth the wait.

I must commend the Earl of Leicester and The Beer & Brewer Magazine on a well organised and executed event. The overwhelming feeling from others I had spoken to throughout the night was one of enthusiasm and pure enjoyment. They loved the format, the food and of course the paring of a drink that can only be described as ‘God’s Nectar’. The inclusion of guest speakers from 11 local breweries and industry experts throughout the evening kept interest elevated. Being able to listen to, and meet, some truly passionate leaders in the industry was an absolute highlight. The speakers included:

Although this was not my first dining experience at the Earl of Leicester, it was certainly the largest and most mind-blowing. The event will certainly resonate with me for many years to come (notwithstanding some foggy points).

Even though this was an annual event, I must recommend heading to the Parkside pub for one of their super-sized schnitzels, bountiful burgers or other mouth-watering meals. While you are there you can also work your way around their ‘World of Beers’ challenge or simply try their ever evolving line-up of craft beers in the front bar.