A Chorus of Disapproval 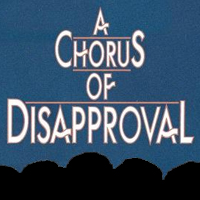 When people say the suburbs are dead, I mainly scoff, having once lived in a suburb myself, but when I pulled up to St Jude's for the opening night of A Chorus of Disapproval and found the car park to be a graveyard, well, it breathed new life into the phrase.  However, the theatre itself was anything but lifeless as a full house was entertained by Sir Alan Ayckbourn's ancient musical within a comedy.

The Pendon Amateur Light Operatic Society is rehearsing the hit show of 1728, The Beggar's Opera.  Enter stage left does Guy Jones of Leeds who fancies himself a bit of a singer and auditions for the company.  But apparently Pendon is full of foxy ladies and short on lads, so young Guy seems to mainly learn his lines lying down.  Everyone has an angle and Guy is embroiled in a lot of small town shenanigans, some of which would make a crow blush.

The cast created a panoply of eccentric British types the likes that you would enjoy in Midsomer Murders.  Without exception, they were well rounded and highly detailed characterisations, no doubt, coaxed out of them by director Kym Clayton.  The star of the show was Andrew Clark playing the Beggar's director.  His thick Welsh accent, and harried and anxious demeanor, were a perfect vehicle for Ayckbourn's acidic barbs.  James Spargo's Guy was a complex presentation of a gormless rube who meteorically attains a high level of sexual sophistication.  The entire cast worked so well together I imagined myself watching a provincial theatrical production in England, doing either A Chorus of Disapproval or The Beggar's Banquet - take your pick.  Songs from The Banquet are interspersed with the action, and apparently echo the action of the play, but most of that subtlety was lost through the fault of no one. It did not matter a jot, though, because the songs ranged from ably rendered to a joy to listen to.

St Jude's has a stage the size of a kitchen and clever fold outs and slide-aways made potentially vexing scene changes a breeze (set design: Robert Aust).  My only complaint is with Ayckbourn himself - the plot proceeds at a snail's pace due to lengthy chit chat and the whole shebang has a rather wimpy denouement.

A chorus of approval for St Jude's and their current production.  And you'd be lucky to get a ticket - they are nearly sold out for the entire season.