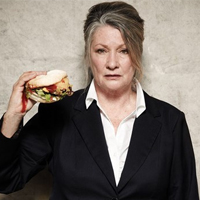 Racial disharmony is a daring and difficult subject and playwright Caleb Lewis should be commended for being the first to bring the latest phenomenon, the Sudanese issue, to light onstage. His Maggie Stone depicts a Sudanese man who, out of hope and naivete, has ploughed himself into debt in his new life in Australia. He needs yet another loan to get out of debt to which end he goes to see loans officer Maggie Stone.

She's a tough-but-fair sort but, in the end of the day, she rejects his application. And thus, acting upon the tragic consequences of that decision, does Maggie Stone get to learn about the Sudanese, who now make up quite a large chunk of Adelaide's population.

Many of them have had dire experiences in refugee camps. Many, like the character of Benny in the play, are "rape babies". They bring immense cultural and psychological burdens to their new worlds.

These Lewis explores, sweeping the arm of racism broadly by planting not just the lonely loans officer into the mix but also the Shylock of a loans shark. Played by Mark Saturno, he speaks like a Jew but is identified as Greek. He wants his pound of flesh. The knives so often carried by the Sudanese are introduced early in the piece and end up being pretty spectacularly put into play with (plot spoiler) one of the longest and goriest deaths to be seen on the Adelaide stage in years.

This play also touches on the themes of welfare, the sense of entitlement of proud Africans and the perplexity experienced by refugees trying to deal with the expectations of a complex new culture. He pinpoints that special human spirit of survival whence, out of the darkness still comes the glimmers of optimism.

There are lots of messages but, happily, the play manages to fall short of didacticism.

And it is one helluva vehicle for Kris McQuade. The playwright was quoted as saying he had McQuade in mind when writing the play and, indeed, it seems just tailor-made for her skills. She makes a rounded and utterly credible character of Maggie Stone.  She's well supported by Shedrick Yarkpai, Ansuya Nathan, Genevieve Mooy and Sara Zwangobani.

While it is the usual fine work from director Geordie Brookman and the State team, it is also something of a tour de force for set designer Victoria Lamb who has dominated The Space with a massive wooden grid which, while mystifying, is just a wonderful thing in its own right.

When: 8 to 30 Nov
Where: The Space Theatre
Bookings: bass.net.au