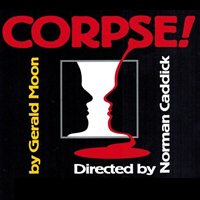 Therry knows its audience a lot better than I do and Corpse! was the ticket for its membership.  Unfortunately, "eager cast breathes new life into corpse" has already been used, so I'll try to think of something else similarly complementary, as this was a thoroughly enjoyable night out at the theatre.

Corpse! is one of those plays written by out-of-work actors - in this case, Gerald Moon - so they can give actors terrific things to do, like double identities and swordplay.  It's a very funny farce-black comedy, maybe thriller, with more than a touch of the sinister and macabre, and plenty of twists to keep you intrigued.  Stylistically, while Corpse! is set in 1936, you would be forgiven to think the play was also written in 1936, yet it made its debut half a century later.

Out-of-work actor Evelyn (they also like to write about themselves) connives to murder his rich twin Rupert with the help of a gullible and hapless criminal.  The scheme is always in danger of unraveling thanks to a meddling landlady.  There's a lot more to it than that, but I don't want to spoil it.

Norman Caddick is a highly experienced director, and shines working on this sort of comedy.  He runs a tight ship with set design (Nick Spottiswoode), lighting (Denise Lovick), and sound (Hugh Hunkin) all deserving of praise.  You could imagine that the creative juices were running hot during rehearsals with the goal of getting the most of every scene.

Adam Tuominen does a star turn in playing both twins with comic distinction.  It's amazing how dextrous he was in the physical business.  Peter Davies was marvellous as the gormless assassin, and Sue Wylie's portrayal of the landlady was imaginative and full of nuance.

You should be dying to see this show.  Corpse! is a lively undertaking.

When: 7 to 16 November
Where: Arts Theatre
Bookings: bass.net.au