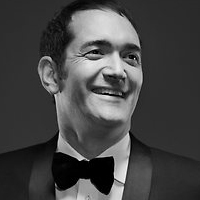 Rising to fame on televisions ‘The Voice’ Darren Percival is not new to performing. The charismatic gentleman won the hearts of Australia last year, showing us the real Darren through our television screens. If you thought he was great on the box, then you’ll agree that he is even better live!

Percival has a wonderful unique voice, and tone, which seems to speak right to your heart, and aches with emotion and experience. Percival’s instrument has a quality unlike any I have heard in recent years, and it is this quality that I could listen to for hours on end. The wonderful thing about his performances is he makes them his own. Don’t expect an impersonator folks; Percival is the real deal and puts his own unique stamp on every number - a stamp that reveals his life’s experiences; the joys, sadness’s and everything in between.

And the audience loves him!

Despite his show being a tribute to Ray Charles, Percival didn’t sing exclusively Charles’ numbers. Sure there were the staples like ‘You Don’t Know Me’, ‘Shake Your Tail Feather’, ‘Hit The Road Jack’, ‘A Song For You’ and ‘I Got A Woman’, but Percival took us on a well-structured (musical director Paul Gray) journey, with emotional peaks and troughs in just the right places and included tracks like ‘Baby Grand’ by Billy Joel and Hank Williams’, ‘Your Cheatin’ Heart’.

One front row audience member had her night, nay year, completely made when Percival gave her a special rendition of ‘I Can’t Stop Loving You’, which had the audience in tears of laughter and showed Percival to be the consummate performer that he really is.

Despite the reputation of reality television shows like the Voice, what we occasionally get are artists like Percival who have been working and performing for over 30 years without a significant break. The fame and exposure Percival experienced as a result is what brought him to the Cabaret Festival, and the reason we get to see and hear an artist of his calibre perform. For this reason I am grateful.

Although his Cabaret Festival shows are virtually sold out, I suggest you try and make it to one of his performances whenever you get the chance.

When: 7 and 8 Jun
Where: Dunstan Playhouse
Bookings: bass.net.au