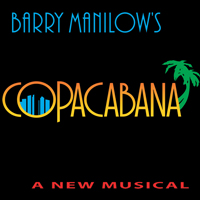 TV music personality Dick Clark asked Barry Manilow and his co-writers Bruce Sussman and Jack Feldman to write a show in 1985 for the idiot box based on Barry’s hit song.  The movie begat the Las Vegas stage show which begat the musical in the UK in 1994 that finally crossed the Atlantic to Pittsburgh in 2000.

What’s not to like about Copacabana?  The song is one of the catchiest tunes ever written.  Imbued with the American post-war sense of optimism, the story has romance, dreams, villains, exotic locations, wise guys and violence.  All this is juiced up with the tropical glamour of Latin night clubs of the sort well-heeled Americans frequented in Havana back in the days when the Mafia called the tunes, before Castro booted them up the date.

Director Max Rayner is definitely in a Latin groove after having directed the spectacularly successful Kiss of the Spider Woman for the Hills Musical Company earlier this year.  Best move number one was casting the lithesome Mason Somerville in the lead role of hero Tony Forte.  Somerville has the perfect pitch for the part and the deft moves to match.  His energy and gusto was uplifting.  Bravo!  Andy Pettigrew’s Rico Castelli could show Tony Abbott a thing or two about misogyny.  Very creepy and real.  He also gets my vote as “Character most unlike the actor’s picture in the program.”  Brendon Cooney slightly overplayed his Sam Silver but redeemed himself when Silver turned to jelly.  Jacinta Vistoli showed off Lola La Mar’s pluck, especially at tackling a Tulsa accent.

The costumes generally were so colourful and bright, I had to put on my sunnies (Leonie Osborn and Carmel Vistoli – costume coordination).  Choreographer Carmel Vistoli had much swishing of skirts and nothing really challenging but the ensemble work worked for me.  I’ve been to the Tropicana in Havana and I’ll tell you, the girls wore a lot less than the chorus in this show.  What happened to the revealing showgirl outfits?  Ole Wiebkin produced his signature complex set design with more flys than a week-old ham, but I don’t think he’s ever been to Manhattan or seen a nightclub show.  In the same vein, Peter Howie could have been more generous with the lights.  Musical director Gordon Coombes’ orchestra was alternately spot on, and a few bob short.

When: 18 to 27 Oct
Where: The Arts Theatre
Bookings: bass.net.au