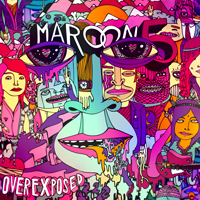 Maroon 5’s more recent records have been a far cry from debut album ‘It Wont Be Soon Before Long’. Their music has evolved since 2008's ‘Hands All Over’ to appeal more readily to a pop audience, and their latest release 'Overexposed' continues this trend.

Holding to tradition, Maroon 5 feature a number of internationally renowned artists, including on the hit ‘Payphone feat. Wiz Khalifa’.  Previous guest artists have included Christina Aguilera on ‘Moves Like Jagger’ from their third album, and Rhianna in ‘Never See Your Face Again’ on their first album.

The album opens with ‘One More Night’, set to a familiar reggae beat (although the drums sound cheaply synthesised), which adheres solidly to a pop formula and will be popular with a very mainstream audience.

Track 2 ‘Payphone feat. Wiz Khalifa’ was one of the singles which launched the album on radio in Australia. Thematically the same drum synth runs throughout, now set to a more common rock beat. This track, still sticking to the formulaic pop attitude, starts to set the tempo for the rest of the album.

‘Daylight’ settles the mood of the album as track 3 – reminding us of Maroon 5’s origins. The slower syncopated beat and tribal attitude Levine elicits with a call and response section in the chorus give this track a great stadium feel, and cements the album firmly into the pop genre.

‘Lucky Strike’ and ‘The Man Who Never Lied’ (tracks 3 and 4) both have great energy, but are relatively nondescript. ‘Lucky Strike’ opens with a great guitar rift and hints towards something special, but the track never feels like it reaches it potential. ‘The Man Who Never Lied’ is another track with a great stadium feel and solid synth back beat – this would be a killer track live.

‘Love Somebody’ is full of non-instrumental synth sound effects which announce a wall of change from the traditional sound of the group. Arguably the most ‘pop-sounding’ track on the album; it doesn’t really break through for me, but will probably come good with repetitive listening.

Departing almost entirely from the first half of the album, ‘Ladykiller’ is a much darker track, with a completely different sound (expect of course that awkward synth drum which I have failed to enjoy on any track thus far). The song works for them, but seems an odd fit in the mix on this album.

If the album was starting to sound confused about its identity with ‘Ladykiller’, it completely lost me with track 8, ‘Fortune Teller’. I really struggled to connect with the vibe on this track. I was however, quickly re-inspired by Levine’s serenading piano ballad in ‘Sad’, the next track on the album. Here we get a chance to hear Levine lyrically transport us, whilst channeling Ben Folds.

‘Tickets’ get us back to the top of the album with the pop vibe back again. Whilst this number may not become a recorder breaker, it has a great commercial fit and is right on track. The album stays on target to complete a full circle back to the start with the upbeat syncopated drum attitude in ‘Doin’ Dirt’. While the energy is really high in this track, I find the drum particularly annoying with the level feeling very forward and almost dominating the lyric.

Finally, as if to take the audience on a reminiscent journey, ‘Beautiful Goodbye’ transports us back to the real Maroon 5 who we all know and love. The pop-rock- beat is solid, and the formula well adhered to; A great way to finish a quality album.

The reviewed release featured a track 13, which was ‘Moves Like Jagger fest. Christina Aguilera’. While not technically included in the main release, as it came off their third album “Hands All Over”, it is still worth of a review in this case as the song has been an outstanding global success topping the charts in 18 countries. It has a funky beat and a ‘whistle-along’ section that is catchy and memorable.

Maroon 5 have definitely made a smooth and very successful transition and this album is certainly worth your listening consideration.